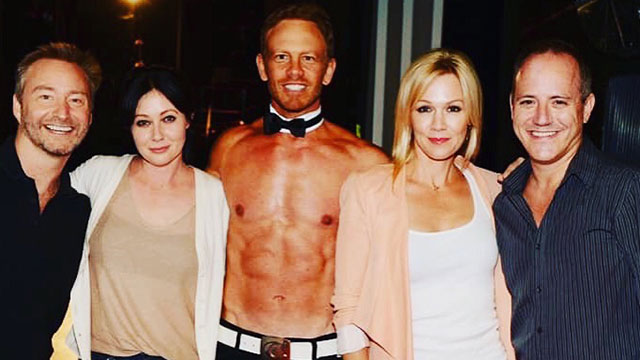 • Monday Memory: One of those “Can you believe this is happening?” moments – back when Beverly Hills 90210 star Ian Ziering was the celebrity guest host of Chippendales here in Las Vegas, and his two 90210 co-stars Shannen Doherty and Jennie Garth came to see Ian in the show. This was snapped backstage before the show. #Goodtimes

• Yahoo News: Four months before the wedding of a gay couple in the UK, the mother of one of the grooms received an anonymous note claiming it was the ‘consensus of the village’ that if the wedding was going to happen then “it should do so far, far away from the village.” The mother did not tell her son before the nuptials, but police are investigating the homophobic note.

• TIME: Hollywood’s wonder gay Ryan Murphy has announced he is adapting the legendary Broadway musical A Chorus Line into a 10-episode miniseries for Netflix. #Hmmm

• Hollywood Reporter: The cast and creators of the CW series Riverdale, as well as actress Octavia Spencer, will be honored at this year’s GLSEN Respect Awards on October 25 in Los Angeles.

•  Out Music: Last month, I shared out singer/songwriter Kyle Motsinger’s groovy anthem for positivity, “Love On Each Other,” and today he drops the equally groovilicious music video.

He’s paired his 70s disco beat bop with images of hippie love kids dancing and prancing in the park. Check it out below.