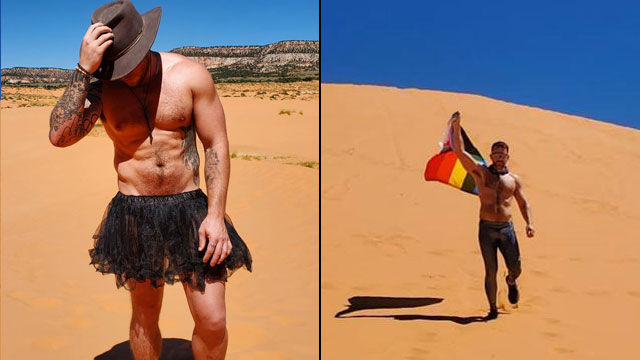 • InstaHunks: Out Olympian Gus Kenworthy (above) shared some fun pics from the desert this Labor Day weekend complete with shirtless black tutu snap. “This year’s Burning Man was canceled but it didn’t stop us from getting weird in the desert.”

• Pink News: Russian ‘Cossack soldiers’ prowled the streets of the Russian city of Yekaterinburg during Pride week attempting to hunt down LGBTQ people. They wound up targeting straight people they thought looked queer.

• Stat News: A large, Phase 3 study testing a Covid-19 vaccine being developed by AstraZeneca and the University of Oxford at dozens of sites across the U.S. has been put on hold due to a suspected serious adverse reaction in a participant in the United Kingdom.

• New Music: Grammy nominee Tayla Parx’s playful new music video, “Dance Alone,” has soulful sass and groove to spare. “We’re all stuck inside while coping with being away from loved ones more than usual,” says the native Texan. “We need human connection, but at least when you’re home dancing in your pajamas while blasting your favorite song, you feel a little less alone. You have the music to keep you company.”

• Instinct Magazine: Chasten Buttigieg, husband to former presidential candidate Pete Buttigieg, shares in his new book I Have Something To Tell You, that he ran away from home as a teen thinking he would only be a disappointment to his parents due to being gay. ” I was so convinced by everything that I had learned for 18 years that I would be a disappointment and the society I grew up in told me that I was twisted and broken.”

• Washington Post: Broadway alone accounts for more tickets sold each year than for all of the metropolitan area’s professional sports teams, and the industry pumps on the order of $13 billion annually into the city economy. Check out this thoughtful exploration of what will be involved, and what it will take, to bring Broadway back to life post-pandemic.

• The Advocate: A New Jersey man faces both federal and state charges – including malicious use of explosives, unlawful possession of two destructive devices, and unlawful possession of a short-barreled rifle – in connection with an explosion at a gym owned by a female couple. Some in the local LGBTQ+ community suspect it was a hate crime.

This year's Burning Man was cancelled but it didn't stop us from getting weird in the desert. 🤪🏜️☀️💛