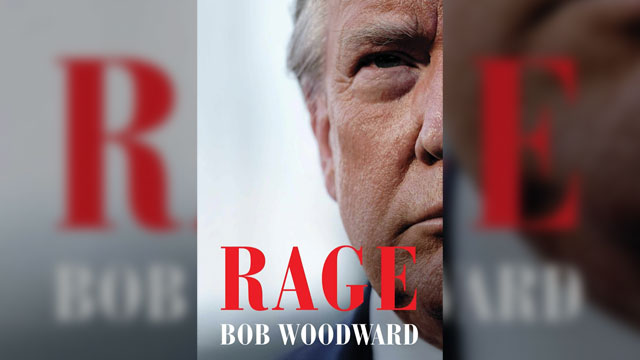 Bob Woodward, the two-time Pulitzer Prize-winning journalist whose reporting on the Watergate scandal of the early 1970s led to the downfall of President Richard Nixon, has released excerpts from his upcoming book, Rage, which includes on-the-record interviews (there’s tape!) with Donald Trump from early December 2019 to July 2020.

Woodward interviewed Trump 18 times on a wide range of topics. The interviews were recorded by Woodward with Trump’s permission, and CNN has obtained copies of some of the audiotapes.

“This is deadly stuff,” Trump told Woodward on February 7.

In a series of interviews with Woodward, Trump revealed that he had a surprising level of detail about the threat of the virus earlier than previously known. “Pretty amazing,” Trump told Woodward, adding that the coronavirus was maybe five times “more deadly” than the flu.

Trump’s admissions are in stark contrast to his frequent public comments at the time insisting that the virus was “going to disappear” and “all work out fine.”

The book, using Trump’s own words, depicts a President who has betrayed the public trust and the most fundamental responsibilities of his office. In “Rage,” Trump says the job of a president is “to keep our country safe.” But in early February, Trump told Woodward he knew how deadly the virus was, and in March, admitted he kept that knowledge hidden from the public.

“I wanted to always play it down,” Trump told Woodward on March 19, even as he had declared a national emergency over the virus days earlier. “I still like playing it down, because I don’t want to create a panic.”

Instead, Trump’s decisions allowed many Americans to doubt the severity of the virus and nearly 200,000 Americans have died from COVID-19.

The new book also includes some tough opinions from many of Trump’s former top national security officials on his presidency.

Former Defense Secretary James Mattis is quoted as calling Trump “dangerous” and “unfit” to be commander in chief.

Former Director of National Intelligence Dan Coats said he “continued to harbor the secret belief, one that had grown rather than lessened, although unsupported by intelligence proof, that Putin had something on Trump.” Woodward writes that Coats felt, “How else to explain the president’s behavior? Coats could see no other explanation.”

You can hear some of Trump’s chat with Woodward in the tweet below, and much more on CNN here.

This is President Trump on tape, on February 7, saying that the coronavirus is "more deadly than your – you know, your, even your strenuous flus." But he minimized the threat in public. On February 26, he told the public "I think that’s a problem that’s going to go away." pic.twitter.com/TOHTpqYtvZ

In audio clips from Woodward's interview, playing on @CNN now, Trump says he thinks China's Xi has the virus under control and says clearly that the Coronavirus is more deadly than the flu. Trump lied to the public repeatedly after this.

On February 7th He knew it is “deadly stuff” and “it goes trough the air” yet he kept holding big rallies for ANOTER MONTH (here he’s on March 2nd). He doesn’t give a damn (even) about his supporters lives. #TrumpKnew pic.twitter.com/deHovrCUtm

“Alright. That was the Press Secretary at the White House lying.” #TrumpKnewpic.twitter.com/s4nO42qTAP

Think about this – Trump knew this was an extremely contagious, deadly airborne virus since at least February and yet he went on TV for months mocking masks and refusing to encourage or mandate people wearing them.

He has blood on his hands.#TrumpKnew