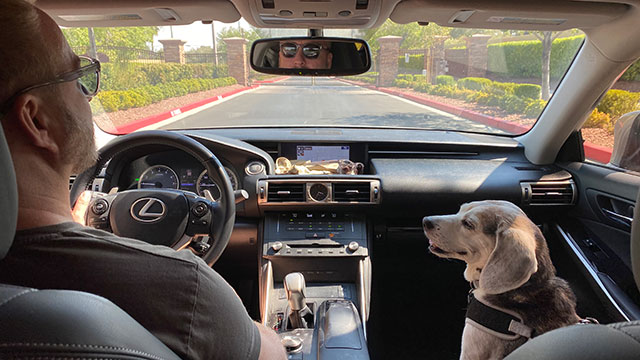 • Snoop Watch: Taking a ride with Snoopy (above). He’s soooo good in the car… #BeagleLife

• Law And Crime: A federal judge in Wisconsin ruled on Monday that absentee ballots postmarked as mailed on Nov. 3—namely, Election Day—shall be counted up to six days later.

• The Advocate: Democratic presidential candidate Joe Biden denounced Poland’s so-called ‘LGBT-free zones’ as “having no place in the European Union or anywhere in the world.” Biden has pledged to make LGBTQ+ rights around the world a priority of his administration.

Let me be clear: LGBTQ+ rights are human rights — and “LGBT-free zones” have no place in the European Union or anywhere in the world. https://t.co/zc8YvSq6iN

• Flip-Flop: In a letter to his Senate Judiciary Committee colleagues, Sen. Lindsey Graham says he’s reversed on confirming a Supreme Court Justice so close to a presidential election because he thinks Democrats were mean to Brett Kavanaugh during his confirmation hearings.

• Tennessean: Former Nashville Councilman Tony Tenpenny died of complications due to COVID-19 on Sunday after several weeks in the hospital. In the months before his death, the conservative Republican shared several social media posts expressing doubts about the coronavirus pandemic including a post calling the Centers for Disease Control and Prevention (CDC) and the World Health Organization (WHO) “pure lying asses.”

• Reuters: Spain has recorded 31,428 more coronavirus cases since Friday, bringing the total number of confirmed infections to 671,468, health ministry data showed on Monday. Spain has the highest number of COVID-19 cases in western Europe and regional authorities have ordered a partial lockdown from Monday in some Madrid neighborhoods where cases are rising fast.

• ETonline: I thought the Television Academy did a terrific job presenting its virtual Emmy Awards last night, although some of the attempts at comedy fell a bit flat without a live audience’s reaction.

For instance, having lost earlier in the Outstanding Guest Actress in a Drama Series category (for the 4th time), a stunning Laverne Cox presented the award for Outstanding Writing in a Drama Series and did a funny bit about missing out on the award. But the tone of her voice – plus no live audience to laugh along with her – made for an awkward moment, and ABC censored part of her remarks.

#emmys This was so odd 😂😂. Gave off Joan Crawford vibes. Laverne killed this dress though 🔥 #Emmy #Emmys2020 #EmmyAwards #lavernecox pic.twitter.com/bim0vlP6fR