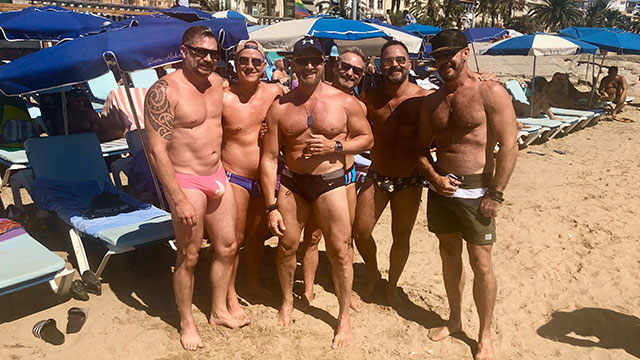 • TBT: Remembering a year ago when we discovered Sitges, Spain, for the first time (above) – and it just happened to be Bear Week 🙂

• WSVN Miami: A man was convicted of hate crime charges and sent to prison after he yelled homophobic slurs and beat up two gay men while they were walking their dog in downtown Miami. Quenton Moss, the assailant, was recorded on police body cams bragging to officers, “I split him good. He’s a [expletive]. [Expletive] should die, die.”

• OUT: Author and activist Sarah McBride is poised to become the first out trans person serving in the upper chamber of a state legislature. The former Obama administration staffer and current National Press Secretary for Human Rights Campaign won the Democratic primary for Delaware’s first state senate district. The seat is considered a sure-bet for Democrats and McBride is expected to win the general election in November.

• GLAAD: Bisexual+ Awareness Week seeks to accelerate acceptance of the bi+ (bisexual, pansexual, fluid, no label, queer, etc.) community. BiWeek draws attention to the experiences, while also celebrating the resiliency of, the bisexual+ community. Throughout BiWeek, allies and bi+ people learn about the history, culture, community, and current policy priorities of bi+ communities.

It’s officially #BiWeek 2020! Join us, @bisexualresourcecenter, and @stillbisexual_official for a week of uplifting and honoring the bisexual+ community, its history, and its resilience. 💖💜💙

• Associated Press: Germany’s Defense Minister Annegret Kramp-Karrenbauer apologized on Thursday for 65 years of discrimination against gay military service members. “I very much regret the practice of discrimination against homosexuals in the Bundeswehr, which stood for the policy of that time,” said Kramp-Karrenbauer said in a statement. “I apologize to those who suffered because of it.”

• Washington Post: A seven-hour “flight to nowhere” advertised by Australian airline Qantas sold out within 10 minutes on Thursday. The flight will depart Sydney on Oct. 10 and return on the same day, with no stops along the way. But passengers are promised views of the Great Barrier Reef, the Uluru monolith and the Australian outback as the plane flies over the country at low altitudes. The 134 available tickets ranged from $787 to $3,787 in Australian dollars, the equivalent of $575 and $2,765.

• HuffPost: Donald Trump was called out on Wednesday for bragging that the U.S. death toll from the coronavirus would be lower if one subtracted the deaths from “blue” states. “The blue states had tremendous death rates,” Trump said. “If you take the blue states out, we’re at a level that I don’t think anybody in the world would be at, we’re really at a very low level.”

According to data collected by The New York Times, 3 of the top 6 states in terms of deaths have Republican governors and 5 of the top 10 voted for Trump in 2016.

Trump said today that blue states are to blame for COVID deaths.

First, it's the President's job to protect the country. The whole country. All the states. Trump failed.

Second, of the six states with the most COVID deaths so far, half have Dem Govs, half have GOP Govs. pic.twitter.com/QS6vOGFRw8

If you take the blue states out, the south totally won the Civil War. https://t.co/wF1vHtYIrI