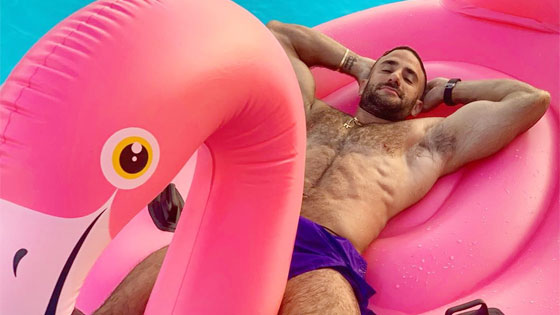 • Bloomberg: The state of Michigan has approved a charter for the first-ever LGBTQ credit union set to open in 2020.

• KIT212: Happy Hump Day! You know what that means over at kenneth-in-the-212… Wrestle Wednesday!

• HuffPost: Talk about underhanded politics… After promising there would be no votes until Wednesday afternoon out of respect for 9/11, North Carolina GOP lawmakers in the state House took advantage of Democrats attending memorial ceremonies to push through an override of Democratic Gov. Roy Cooper’s veto of the state budget.

Rep. Deb Butler of North Carolina slammed Republicans for overturning a veto while Democrats were at a 9/11 ceremony.

• Washington Post: The Supreme Court has ruled the Trump administration’s policy to bar many Central American migrants from seeking asylum in the United States may go into effect while legal challenges move forward. Since 1980, the U.S. has said those who say they are fleeing persecution and violence in their home countries have the right to at least apply for asylum.

• NY Times: The White House was directly involved in pressing the National Oceanic and Atmospheric Administration to denounce the weather forecasters who contradicted Donald Trump’s claim that Hurricane Dorian would probably strike Alabama. Mick Mulvaney, acting White House chief of staff, told Wilbur Ross, the commerce secretary, to have NOAA publicly disavow the forecasters’ position that Alabama was not at risk.

• New Music: Tony Award winner drops his newest music video, the uptempo, pulsating “Rain,” from his album Sing To Me Instead.

Platt’s upcoming September 29 concert at Radio City Music Hall is not only sold-out (huge place, don’t you know?) but it will be filmed for a future Netflix music special.

And of course, there’s the upcoming Netflix series The Politician, by Ryan Murphy, which he stars in alongside Jessica Lange, Gwenyth Paltrow, and his Dear Evan Hansen co-star Laura Dreyfuss.