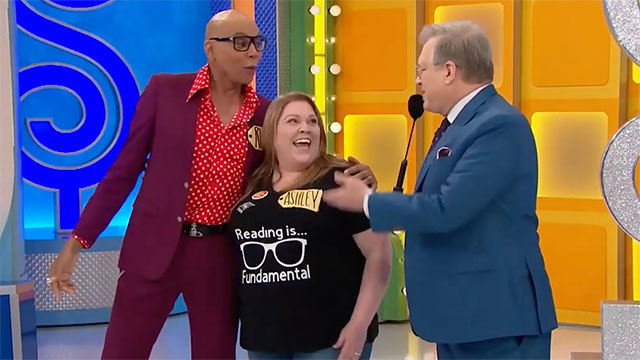 • Billboard: Emmy Award winner RuPaul (above) raised nearly $100,000 for Planned Parenthood during a special nighttime edition of the long-running game show, The Price Is Right.

• Reuters: Albania’s leading psychologists’ organization has prohibited members from practicing so-called “conversion therapy” which aims to make gay people straight. Albania joins Germany and Malta as the third country in the EU to ban the practice.

• PBS News Hour: The venerable news outlet interviewed 74 former staffers for Joe Biden in regard to Tara Reade’s allegations that the former vice president sexually assaulted her in 1993. None of the people interviewed said that they had experienced sexual harassment, assault or misconduct by Biden. All said they never heard any rumors or allegations of Biden engaging in sexual misconduct, until the recent assault allegation made by Reade.

• The Advocate: As a huge fan of the 1970s sci-fi series The Bionic Woman, I found this article, exploring why the show resonates so deeply with feminist and LGBTQ audiences, fascinating.

• HuffPost: Taking a page from his dad’s playbook, Eric Trump insisted in an interview that COVID-19 will “magically” disappear — after Election Day. He claimed that the coronavirus that has killed 312,000 people around the globe — including nearly 90,000 Americans — is a ploy cooked-up by the Democrats to stop Donald Trump from rallying his supporters at campaign events.

• New Music: Eurovision’s 2018 champion Netta is back with her new song “Cuckoo”, a devastating heartbreaker of a ballad that feels eerily poignant given the state of the world currently.

The song debuted as a part of Eurovision: Europe Shine A Light which aired in 46 countries and included this touching video of Netta performing the track with a custom-made music box. The studio recording of the single is also available now.

The track is a noticeable departure for the Israeli artist/composer/songwriter who has become famous garnering over 1 billion streams globally for her bombastic, colorful, and high-adrenaline pop songs like “Toy” which led to her win at the Eurovision competition.