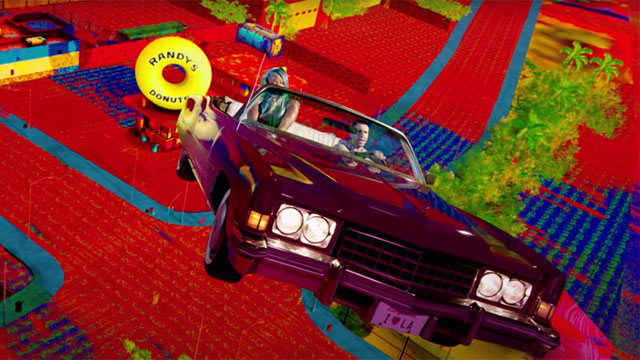 • Instinct Magazine: Paul Bettany, who plays the android Vision in the Marvel Cinematic Universe Avengers films, recently told Conan O’Brien that during the making of 2015’s Avengers: Age of Ultron, director Joss Whedon became a bit obsessed with the scene of the Vision being born naked and sporting full-on peen.

• New Music: SoCal’s iconic donut shop, Randy’s Donuts, has teamed up with Maroon 5 to create a limited-edition donut box and custom donut, in conjunction with the band’s new video for hit single, “Beautiful Mistakes” and its numerous odes to donuts.

Directed by Sophie Muller, the “Beautiful Mistakes”music video takes viewers on an archetypal LA drive, which turns it into a surreal fantasy with a colorful world of flying cars, donuts and a dreamlike narrative. #YouHadMeAtRandy

• Williams Institute: As Republicans push back on Democrats intentions to make Washington, D.C. a state, it’s worth noting that the District has the largest per capita LGBTQ population in the country and 47% of the residents are Black. Also, D.C. has a larger population than Vermont or Wyoming.

• Stonewall Gazette: In a recent interview, actor Ronen Rubinstein (9-1-1: Lone Star) recently shared that he identifies as ‘part of the LGBTQ community.’ Rubinstein plays out character TK Strand on the hit TV series.

• Data For Progress: Voters across the ideological spectrum overwhelmingly support an 8-year pathway to citizenship for undocumented immigrants who pass a background check – 69% support versus 25% oppose.

• NPR: The co-founder and former CEO of Parler has sued the conservative social media platform over his firing this year. John Matze claims Parler’s leadership took away his 40% stake in the company in an “arrogant theft,” intimidated and bullied him in an ouster he says was illegal and left him owed millions of dollars.

• Variety: A holiday-themed romantic comedy centered on gay men is coming to Netflix. Single All The Way will star Michael Urie, Philemon Chambers and Luke MacFarlane.

Synopsis: Desperate to avoid his family’s judgment about his perpetual single status, Peter (Urie) convinces his best friend Nick (Chambers) to join him for the holidays and pretend that they’re now in a relationship. But when Peter’s mother sets him up on a blind date with her handsome trainer James (MacFarlane), the plan goes awry.

May I have this now, please? 🎥🏳️‍🌈 https://t.co/OMpmMnNkFh