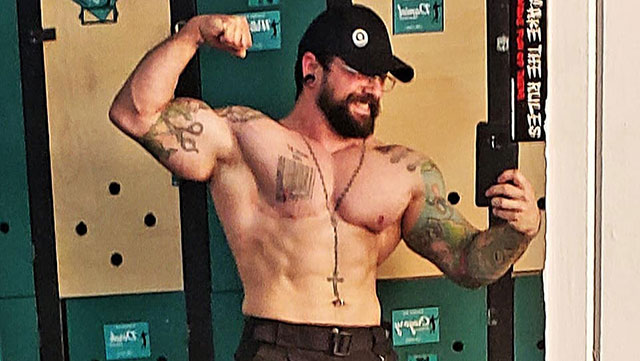 • InstaHunks: Woofy transgender bodybuilder Paulo Batista (above) is literally pumped to be back in the gym: “One of my first days back to a gym in a while! It felt great to get a real pump and sweat in!”

• People: CNN anchor Anderson Cooper opens up about being a dad to adorable baby Wyatt. “This is a dream come true,” the veteran journalist says of parenthood.

• Pride Month TV: The acclaimed documentary, The Death and Life of Marsha P. Johnson, celebrates one of the icons of the gay rights movement, and the self-described “street queen” of NY’s gay ghetto in the 1960s. When Johnson’s body was found in the Hudson River in 1992, police called it a suicide and didn’t investigate. David France’s film seeks to uncover the truth of her death while celebrating her legacy. Streaming now on Netflix.

• The Hill: The final testing stage for a potential coronavirus vaccine developed by Moderna is set to begin in July. John Mascola, the director of the vaccine research center at the National Institute of Allergy and Infectious Diseases, told the Wall Street Journal the trials will involve about 30,000 people at more than 50 sites, which will mostly be within the U.S.

• Washington Post: Last week, the hashtag #LadyGraham exploded on social media in response to allegations made on Twitter by gay adult-film star Sean Harding against Sen. Lindsey O. Graham of South Carolina. The hashtag purportedly refers to Graham’s nickname among male sex workers. What followed has been a mixed bag of political commentary, wanton speculation and downright trolling.

• Politico: The Trump administration is preparing to open the door to oil and gas drilling off Florida’s coast — but will wait until after the November election to avoid blowback in a swing state whose waters both parties have long considered sacrosanct, according to four people familiar with the plan.

• Out Music: Acclaimed out singer/songwriter Rufus Wainwright drops his latest music video, “You Ain’t Big,” from his upcoming album Unfollow the Rules.

“I originally wrote the song “You Ain’t Big” about the strange fact that in the music business worldwide until recently (our estimation has fallen considerably) no matter how well you’ve done anywhere else, if you couldn’t make it in the heartland of the US you weren’t really considered a true star,” shares Wainwright. “Think Little Richard, Elvis, the Beatles, and Julio Iglesias.”

“Its vintage sound harkens back to the classical American country music sound of the 40s and 50s and with the help of opposing images in the video of how different life was for white people compared to black people in the 1950’s, as it has sadly remained,” adds the two-time Juno Award winner. “I think it rings appropriate for this time and professes a certain truth.”