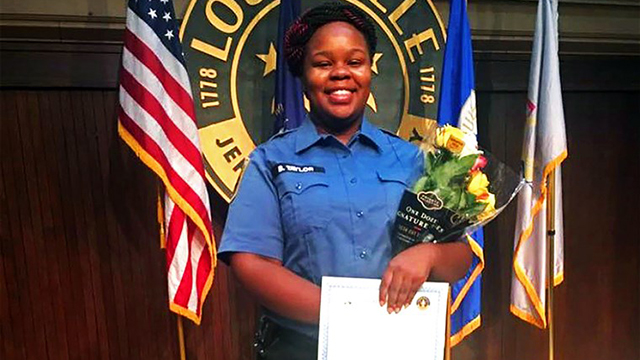 The Louisville Metro Police Department has released a nearly-blank incident report regarding the fatal shooting of Breonna Taylor three months ago.

From the Louisville Courier-Journal:

The four-page report lists the time, date, case number, incident location and the victim’s name — Breonna Shaquille Taylor — as well as the fact that she is a 26-year-old black female.

The report redacts Taylor’s street number, apartment number and date of birth — all of which have been widely reported already.

And it lists as her injuries, “none,” even though she was shot at least eight times and died on her hallway floor in a pool of blood, according to attorneys for her family.

It lists the charges as “death investigation — LMPD involved” but checks the “no” box under “forced entry,” even though officers used a battering ram to knock in Taylor’s apartment door.

It also lists under the “Offenders” portion of the report the three officers who fired in Taylor’s apartment, fatally shooting her — Sgt. Jon Mattingly, 47; Myles Cosgrove, 42; and Brett Hankison, 44.

Taylor was shot and killed in the early morning hours of March 13 when police officers forced their way into her home due to a ‘no-knock’ warrant related to a drug investigation. Her boyfriend, Kenneth Walker, has said the couple believed burglars were trying to break into the apartment.

Walker fired one shot in defense at what he thought were ‘intruders.’ The officers returned fire striking Taylor 8 times and killing her.

The officers were wearing body cameras at the time but had turned them off shortly before arriving at Taylor’s apartment.

Last Friday would have been Taylor’s 27th birthday.