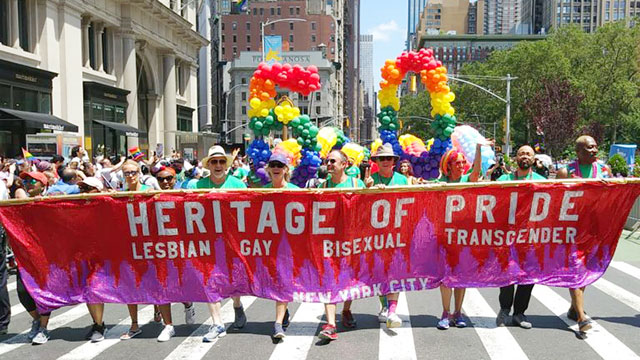 For the first time in its half-century history, the NYC Pride March, has been along with all in-person events leading up to the annual June event, has been canceled.

Heritage of Pride, the organization that runs the march, made the announcement Monday, shortly after New York Mayor Bill De Blasio announced the cancellation of permits for all large events for the month of June.

“This probably will not surprise you,” De Blasio said at a coronavirus briefing before announcing the cancellation of June’s Celebrate Israel, Puerto Rican Day and LGBTQ pride parades. The mayor promised these events would go on in some format “when it’s the right time.”

“This year is the 50th anniversary of the pride parade, and it’s a very, very big deal,” De Blasio said in Monday’s briefing. “That march is such an important part of life in this city, but this year in particular it was going to be something that was a historic moment.”

That first pride march, held in June 1970 a year after the Stonewall riots, is often regarded as the beginning of the modern LGBTQ rights movement.

This year’s NYC Pride events were scheduled to commence June 14 with Janelle Monaé and Pussy Riot set to perform.

Heritage of Pride has announced a plan to coordinate with InterPride, an international organization comprised of local, regional and national pride planning organizations, to participate in a 24-hour virtual, online “Global Pride” scheduled for June 27.

“The plan is to have this 24-hour program that will be a worldwide celebration of pride,” said Ron deHarte, co-president of the United States Association of Prides and a member of the InterPride organizing committee.

It's with a sad heart that we let everyone know that Mayor De Blasio has made the decision to cancel all June in-person gatherings, including NYC Pride events, in response to the ongoing health crisis.