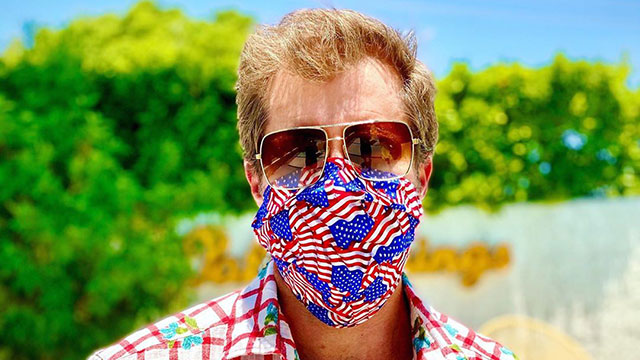 • InstaHunks: New American citizen Craig Ramsay (above) has a message for his fellow citizens – “Wear a f**king mask, America🇺🇸”

• Washington Post: A long-acting drug injected every two months is more effective at preventing HIV than the pills most commonly used by people at risk of acquiring the infection. The injectable drug cabotegravir (tested on more than 4,500 men and transgender women who have sex with men) proved to be even better than oral drug Truvada in blocking the virus.

• Pink News: It only took around 240 mixed-sex couples across more than 16 years, but executives for the UK reality series Strictly Come Dancing are now allegedly considering not one, but two same-sex couples for the show’s upcoming season.

• Boy Culture: Daniel Ryan Maples, a white insurance agent wearing a red ‘Running the World Since 1776′ shirt, lost his ever-lovin’ shit when asked by a fellow customer to wear a mask inside Costco. He approached the other customer aggressively, shouting the words that will follow him for the rest of his miserable life: ‘I Feel Threatened.’

Nobody who charges you with their whole body tensed up and barking at you with “I FEEL THREATENED” is actually threatened.

This asshole MUST be a cop. Those are the last words many unarmed Black people hear before being murdered by police. pic.twitter.com/aqAee1Ic2I

• Indiana Lawyer: The Indiana Court of Appeals ruled Monday former Illinois Congressman Aaron Schock and his campaign committee, Schock for Congress, are off the hook regarding the law firm’s unpaid legal bills totaling $159,946.37, plus interest.

• Provincetown Reimagined: The gay mecca’s acclaimed international film celebration will present a modified festival with drive-in and virtual screenings running July 16-19, 2020. The Festival will kick off with two nights of screenings at the Wellfleet Drive-In including Mischa Richter’s documentary, I AM A TOWN, shot entirely in Provincetown; the 2020 Sundance hit, SAVE YOURSELVES!; and a special night hosted by John Waters with film titles announced soon. The Festival will also feature virtual screenings with selections curated to speak to this moment in time.

THIS is why RuPaul mass deleted. Smh. pic.twitter.com/9IF72URRYR