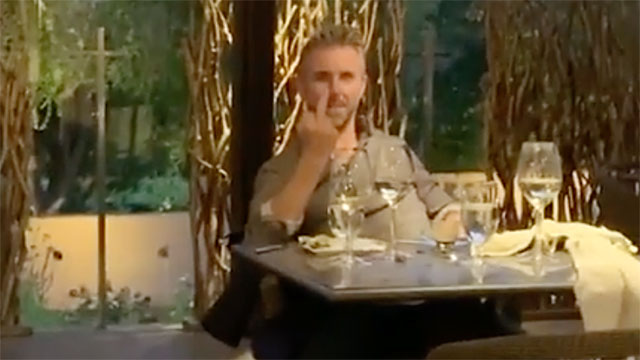 Another crazy racist acts out with full knowledge of a camera recording his foolishness and ends up issuing an empty ‘apology.’

According to USA Today, Jordan Chan and her family were celebrating her aunt’s birthday Saturday when one patron, Michael Lofthouse, CEO of Solid8, LLC, a San Francisco cloud computing services company, began harassing the family from a nearby table.

The video starts with Lofthouse flipping off Chan after she asked him to repeat what he’d said previously. People at the table can be heard saying “you need to leave.”

After getting up, Lofthouse then says, “You f—— need to leave! You f—— Asian piece of s—!”

A server, in frame, then immediately yells at him, “No, you do not talk to our guests like that. Get out of here.”

When confronted on social media after the incident, Lofthouse doubled down on his ugly behavior.

And then, once busted by the news media, Lofthouse ‘apologized’ in a statement to ABC7:

My behavior in the video is appalling. This was clearly a moment where I lost control and made incredibly hurtful and divisive comments. I would like to deeply apologize to the Chan family. I can only imagine the stress and pain they feel. I was taught to respect people of all races, and I will take the time to reflect on my actions and work to better understand the inequality that so many of those around me face every day.

You have to wonder: Is Lofthouse mentally ill that he would have such enormous emotional mood swings? Or is this a case of the obvious – he got caught and wrote a hollow apology that ‘sounds like’ what he should say in order to save his butt?

❗️❗️❗️SHARE THIS POST❗️❗️❗️ Trigger warning: Racism, Vulgar Language (FYI he had a LOT more to say after I stopped recording) This is the face of the man who relentlessly harassed my family and I completely UNPROVOKED, UNWARRANTED, and UNCONSCIONABLE. We were celebrating my tita’s birthday, literally just singing happy birthday to her and taking pictures, when this white supremacist starts yelling disgusting racist remarks at us. (“Fuck you Asians” “Go back to whatever fucking Asian country you’re from” “You don’t belong here”) It is no coincidence that this man has the audacity to showcase such blatant racism on the 4th of July. White supremacy has a notorious habit of masquerading as patriotism! The fact that Donald Trump is our president (i.e. THE MOST POWERFUL MAN IN THE WORLD) gives racists a platform and amplifies voices of hate. The surfacing of racists is so prevalent right now, even in such an ethnically/culturally diverse and liberal state like California, because Trump HIMSELF uses his position to incite racial tension and to promote aggression towards POC, foreigners, and immigrants. We need change! PLEASE PLEASE PLEASE VOTE THIS UPCOMING RE-ELECTION. PROTECT ALL PEOPLE REGARDLESS OF SKIN COLOR AND ETHNIC ORIGIN. ✊🏻✊🏼✊🏽✊🏾✊🏿