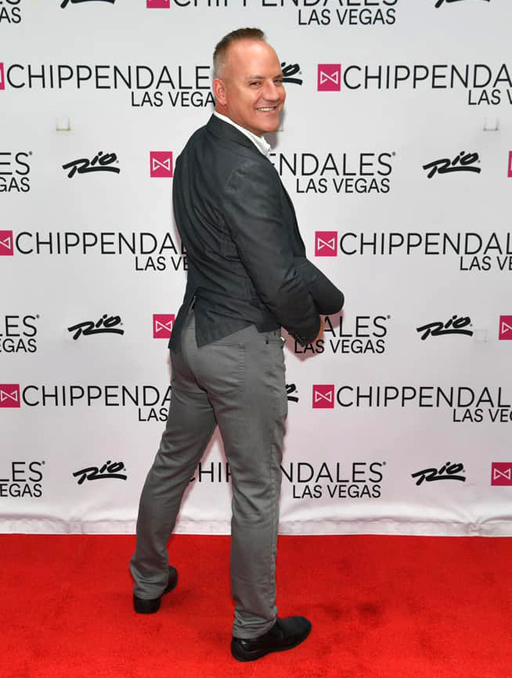 • Hottie of the Day: Prior to last week’s red carpet at Chippendales in Las Vegas when ‘Jersey Shore’ star Vinny Guadagnino returned as celebrity guest host, my hubby Michael (longtime publicist for Chipps) helped photographers get their light settings right standing in for the reality star. This was his ‘back of the dress’ pose.

• Tennessee: A group of over 300 lawyers says Coffee County District Attorney Craig Northcutt should have his law license suspended after admitting he doesn’t prosecute domestic violence crimes involving married same-sex couples. “I don’t prosecute them because I don’t recognize it as marriage. There’s no marriage to protect.”

• Sun Sentinel: The South Florida newspaper had an ‘oopsie’ when it tweeted out a headline about moving a 100-year-old house, but instead featured a hot guy and a link to a story about an ‘adult-themed’ party in Key West.

How a nearly 100-year-old house will be saved by moving it across town https://t.co/F1vqJgJTEv pic.twitter.com/K9VZ876Vnt

• Newsweek: Senate Majority Leader Mitch McConnell got his panties in a wad when #MoscowMitch began trending on Twitter after he refused to allow a vote on new election security measures to stop interference in U.S. elections. What he’s not keen on admitting is he received campaign donations from voting machine lobbyists before blocking the vote.

• Out Music: Earlier this month, I interviewed out singer/songwriter Tom Goss about his latest single, “Quayside,” from his upcoming album, Territories.

The song is born out of Goss’s own experience exploring a polyamorous relationship after his husband asked to open their marriage. It was a journey he’d not previously considered.

“I really wanted the video to reflect the uncomfortableness of my situation,” Goss recently told Parade. “I want the viewer to feel the uncertainty and fear that I did visiting the Quayside for the first time.”

“That said, we were very conscious to make sure that my actions were still my own,” he added. “Nobody ever forced me through the door, I was, and am, a person who chooses his own path. The final decision, to walk into the Quayside and to completely submerge, represents the most complicated and uncharted path of them all — polyamory.”