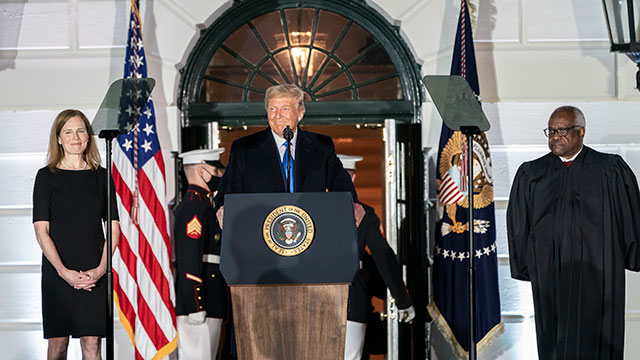 • Fox19Now: Wyoming police are investigating after someone allegedly stole an LGBTQ Pride flag from a front porch and burned it. The Fitzpatric family says the vandal came right up to their front porch and even tripped on their Christmas decorations in order to snatch it up.

• New York Times: The Supreme Court on Tuesday refused a long-shot request from Pennsylvania Republicans to overturn President-elect Joe Biden’s victory in the state, delivering an unmistakable rebuke to President Trump in the forum on which he had pinned his hopes. The Supreme Court’s order was all of one sentence, and there were no noted dissents.

The Supreme Court has rejected a Pennsylvania Republican congressman’s request to prevent Pennsylvania from certifying its presidential election results in favor of Joe Biden.

This case is different from the lawsuit filed by the state of Texas this morning. https://t.co/ReS0eU0JsY pic.twitter.com/ybt6Dvlom4

• Edge Media: An 18-year-old suspect accused of murdering a 15-year-old boy lured him into the woods in Cheshire, England, with a promise of sex before clubbing him to death a year ago, the prosecution in the case charged in court.

• AZ Central: The Arizona Supreme Court on Tuesday affirmed President-elect Joe Biden’s victory in Arizona, upholding a lower court’s finding that there was no misconduct, fraud or illegal voting in the general election.

• Change.org: Trevor Wilkinson, a student at Clyde High School in Texas, was suspended after he wore nail polish to school. Now, over 125K people have signed a petition in support of his freedom of expression.

• Instinct Magazine: Despite lowering before 2019, HIV infections are on the rise again.

• Christmas Music: From Annie Lennox’s holiday release, A Christmas Cornucopia. As Slant Magazine wrote in 2010: “’God Rest Ye Merry Gentlemen’ marries the traditional with the modern in a daring and ultimately very successful way. Lennox’s commitment to the material is palpable.”