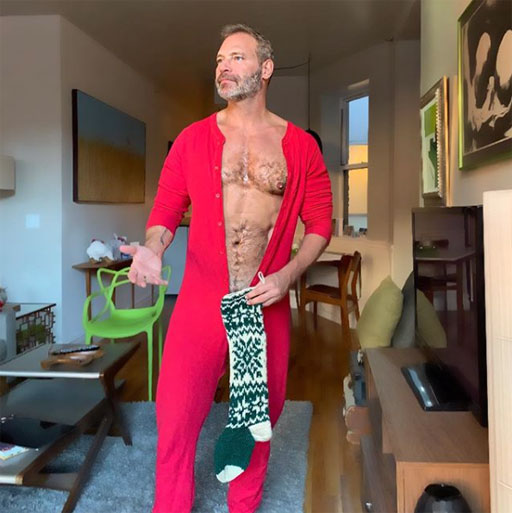 • Handsome InstaHunk Jim Newman (above) has been running a fabulous “Days of Christmas” campaign over on his Instagram taking daily pics au naturel with items in his home blocking just the barest of body parts. Well-worth clicking over to as this was the most tame I can post here 😉

• An amateur photographer from England received a 16-year jail sentence for drugging and raping male models. “I get a kick out of robbing a straight guy out of his masculinity,” he shared in a conversation.

• Donald Trump, who promised his infamous wall along the Mexican border would be paid for by Mexico, now says “The wall will pay for itself.”

“The wall will pay for itself on a monthly basis,” Trump said, contradicting his previous claim that Mexico would pay for the border wall and threatening a government shutdown if a spending bill doesn’t include his $5B demand for funding it https://t.co/QTj5qScUCn pic.twitter.com/NUNy53tGWX

• Even though the play opened to very good reviews, the Broadway revival of Harvey Fierstein’s Torch Song, starring out actor Michael Urie, has announced it will close January 6.

• The stock market moved into bear territory this week as the Dow fell another 417.11 points today, closing the week with a loss of 6.75% – its worst weekly decline since October 2008. #ThanksTrump

• In a year of ups and downs, the world searched for “good” more than ever before — according to Google Trends. From the epic headlines to the everyday moments, here’s to all the good that people discovered in 2018.