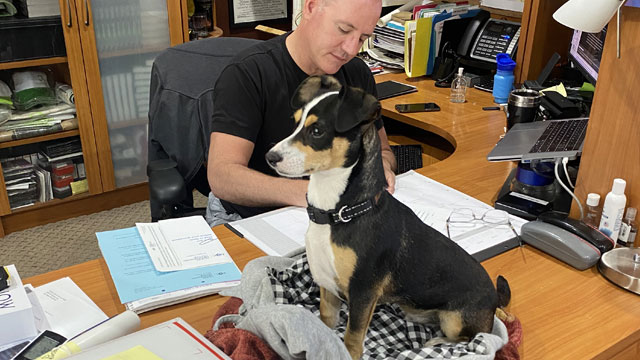 • Caprio Media Design: Brody (above) likes to stand guard while my hubby Michael works. Of course, ON the desk isn’t quite the optimal spot for Michael, but no one asked him.

• ABC4 News: A Salt Lake City man reportedly violently raped and assaulted a lesbian woman and told her that he was going to “fix the gay,” according to police.

• Yorkshire Live: A father stabbed his own two sons during a Boxing Day argument when they called him out for transphobic and homophobic slurs. One of the sons had to spend three nights in the hospital because the knife almost perforated his bowel and another had a stab wound near his heart.

• New York Times: In the final weeks of Donald Trump’s term, Rep. Matt Gaetz (R-FL) privately asked the White House for blanket pre-emptive pardons for himself and unidentified congressional allies for any crimes they may have committed. At that time, he was being investigated as to whether he had a sexual relationship with a 17-year-old that violated sex trafficking laws.

NEW: In the final weeks of the Trump administration, Matt Gaetz, who is under federal investigation for sex trafficking a minor, sought blanket pardons from the Trump White House for himself and congressional allies. w/@maggieNYT @npfandos https://t.co/V1Mrh3gy3q

• People: A man from Baton Rouge, Louisiana, was arrested at Walt Disney World in February for refusing to undergo a simple temperature check. As he was being arrested he announced to the officer, “I spent $15,000 to come here!” As if that would absolve him from dodging the rules…

• Forbes: Donald Trump’s fortune fell by nearly a third, from $3.5 billion to $2.4 billion, during his time in the White House. Had he divested himself of everything on Day 1, paid the capital-gains taxes on the sales, and put the proceeds into a conflict-free fund tracking the S&P 500, Trump would have ended his presidency an estimated $1.6 billion richer than he is today.

• Gr8erDays: Billy Dee Williams is the nostalgia site’s ‘Mantique of the day’ as the big screen star celebrates his 84th birthday. He made his Broadway debut at the age of  7 in 1945!