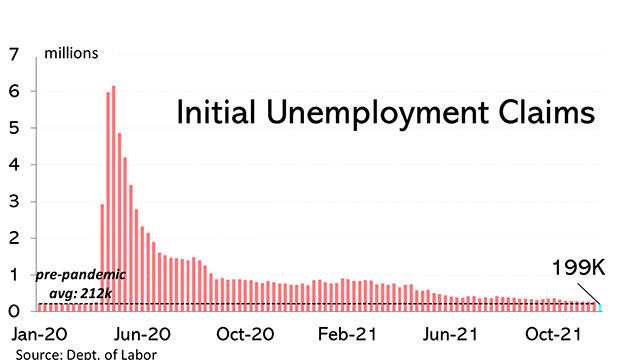 New weekly claims for unemployment benefits dropped to 199,000 for the week ending November 20, a drop of 71,000 from the previous week. That’s the lowest level in more than 50 years.

The 199,000 figure was significantly lower than the 260K many economists were expecting.

Claims fell to the lowest level since November 1969 and are now well below the pre-pandemic trough of 225,000 applications received the week of March 14, 2020.

While high inflation has stressed many household budgets, U.S. job growth, economic production, stock values and corporate profits have all steamed ahead.

The last time unemployment claims were this low, the first man had just walked on the moon. pic.twitter.com/wZagxhAG42

Our economic strategy and vaccination plan are working. https://t.co/GHRB01Rt5D

This isn't just a pandemic low for unemployment claims, it's the lowest we've seem since November 1969. https://t.co/dqTWDoZPuG