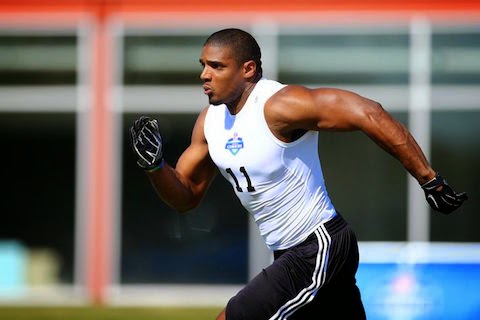 Today marked the first ever NFL Veteran Combine where 105 former NFL football players were given a chance to show their stuff in hopes of catching the eye of a team looking for talent.

Among those players was Michael Sam.

After coming out last year before the NFL draft, Sam saw his prospects drop from a possible third round pick to seventh round. As the 249th pick last year, Sam was drafted by the St. Louis Rams but cut on the last day before the regular season began. He was picked up for the Dallas Cowboys practice squad, but released after six weeks.

After months of training, today was Sam’s opportunity to show why he was the 2013 Co-Defensive Player of the Year in the SEC.

The results of the Veteran Combine for Sam were mixed. His 40-yard-dash time was disappointing, at around five seconds. Yet I thought he looked a bit looser and more fluid in many of the drills. Interestingly, I overheard a scout say to someone else of another player who wasn’t Sam, “his 40 time wasn’t great but that really doesn’t matter.” It will be interesting to see if the media and teams afford Sam the same luxury.

When asked about returning to the football field, Sam answered, “Whoever wants me.”

“Absolutely, I think my chances are high,” the 25-year-old defensive end said. “As long as I have that will to play the game and I am healthy, you’ll continue to see me trying to play in this league. I am very confident I will be playing football somewhere.”

Sam also acknowledged a standing offer he has from a Canadian football team. “If that’s the opportunity, I’ll take it. I’m a fighter and I’m going to keep fighting.”

Man. I want this for Sam so bad.