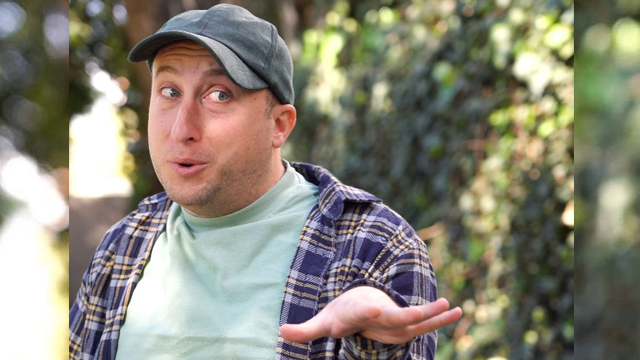 During a perfectly socially-distanced afternoon in the park, funny guy Michael Henry has a question for John Hartman about the men he’s attracted to.

Before Henry can get to the question, though, we find out Hartman has an ‘issue’ with oversharing on a range of topics including erectile dysfunction, never tipping bartenders, and flatulence in libraries.

Henry is specifically curious to know if men’s confidence is a turn on for Hartman.

“The reason why I ask is because a good friend of mine told me his number one turn-on when it comes to men is confidence,” explains Henry. “And I thought, ’No, no, no, no, no, no.’”

Apparently, not Henry. Which leads Hartman to flip the script and ask, “What do you like then? Insecure, emotionally damaged men…like you?”

The discussion quickly turns into a pros and cons comparison of confidence vs. vulnerability. Henry finds men who are sure of themselves in work and life just fine, but really digs guys who are insecure about those things, too.

“Weirdo – I don’t want to hear about his insecurities,” says Hartman. “Don’t tell me you’re uncomfortable with your bald spot or your weight gain. Own it!”

“Nothing makes my d*ck more limp than a guy whining about his misfortunes,” he adds.

Hartman admits he’s drawn to a more stereotypic kind of guy as he rattles off qualities like “assertive,” “sturdy,” an achiever of “big things” with a deep voice, a beard and a three-piece suit…although now the conversation is more about masculinity and not confidence.

Obviously, attraction is more than a simple ‘this’ or ‘that’ equation. But Henry raises a valid question about how and what gay men find to be a turn-on.

I have to admit I’ve said for years confidence (not cockiness) is a definite turn-on for me.

Let me know in the comment section, readers – where does confidence land on your dating spectrum?