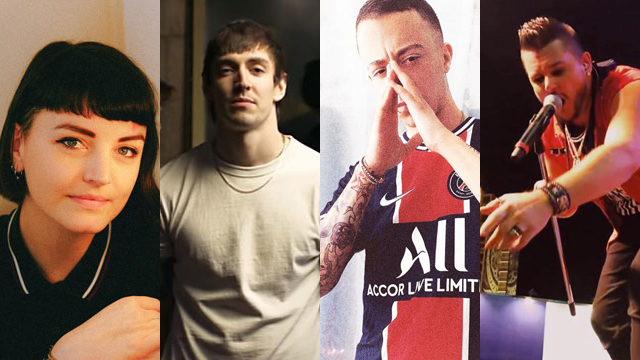 New music for your Hump Day listening, and there’s something for everyone ranging from head-banging rock, guitar pop, a classic rock ballad, and pensive, chill hip-hop.

First up is the powerful new single from Trash Boat, “He’s So Good,” a concept piece about a young man who, even in the face of abandonment, spite and naked homophobia remains a positive and loyal element in their family; forgiving and loving parents who don’t love him back.

“Mercifully, my background is love and support,” explains lead singer Tobi Duncan. “I come from a family who never expected me to be anything other than myself. I will always be thankful for that. I never felt the need to announce that I felt differently, because I didn’t feel different in a way that was upsetting me. I have a brother, a cousin and an uncle, all gay. No issues, just love.”

“I too was interested in men the same way I was with women,” continued Duncan. “I reserve my right to be attracted to any one human in the world regardless of their gender/ orientation or whatever. Why box myself in? A label seems limiting. I just felt like me and felt comfortable being so with the support of my family and friends.”

It’s not often we get full-on rock music that lands so solidly in the LGBTQ space, but this is terrific. And Duncan’s vocals are killer.

The band is teaming up with Hopeless’ Records Sub-City not-for-profit to donate proceeds from merchandise sales to AKT, a charity dedicated to helping LGBTQ+ youth at risk of homelessness in the UK.

Going to Hell is an introspective guitar-pop showcase that represents a time when Hekt was coming out. The record details how there were so many things that didn’t feel right in her life, along with learning how to come to terms with being gay. Or, more accurately, realizing that pretending you’re not gay can’t go on forever.

A track centered around feeling scared to do anything when you like someone, the video for “December” utilizes a single take for the majority of the clip showing her cutting off her own hair in a very bold move.

“My hands were shaking as I chopped my hair shorter than I’ve had it since I was four-years-old, whilst trying to remember the words to the song and not cry,” she recalls.

The track is dedicated to those who have been affected by addiction, depression or anxiety. And after the year we’ve had, who hasn’t?

A favorite frontman for cover bands in downtown Las Vegas, Jeffrey began to create and record original songs during the pandemic lockdown with the help of his musical partner and BFF Kevin Woodall.

“We wanted to write music that we felt, had been missing from the market; real, authentic and artistic,” says the musical duo in a press statement.

Hit the play button below. You can find more on Jeffrey at his official website here.

Montreal artist and Trans Trenderz label founder, Blxck Cxsper returns with their latest single and video for “Self Medicating.”

The track represents a more vulnerable side of Cxsper as they recently opened up about their struggles with suicide, depression, and their recent diagnosis of autism. The vibe is chill and introspective, and leads the listener to a terrifically pensive guitar solo.

“‘Self Medicating’ is a song about me, an autistic person who is going through life masking as neurotypical, not knowing that that’s what they’re doing and that that’s why they feel so lonely and so hopeless,” says Cxsper. “And the same way this song helped me find the words to finally learn about myself, I’m hoping it will help others the same way.”

Earlier this year, Cxsper was named one of Billboard’s first Change Agents: Leaders Stepping Up In A Year of Turmoil, highlighting their efforts to boost up-and-coming Black Trans artists. “Music has the power to humanize Trans people in the eyes of society,” Cxsper told the magazine. “Building a platform to elevate Black Trans voices into the mainstream music industry is the way that I’m contributing my skills to help.”