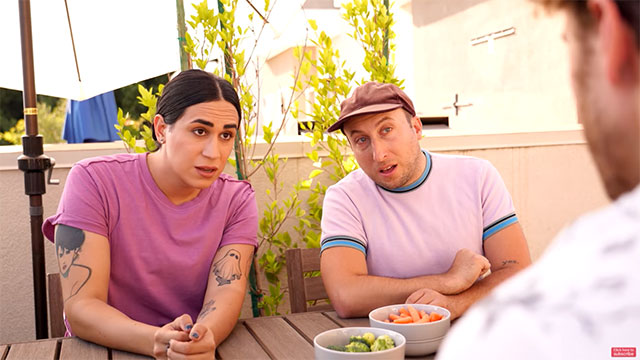 Funnyman Michael Henry, whose short films artfully offer insight into queer pop culture, takes a more sober approach in his latest video as he steps into the tricky terrain of toxic relationships.

While gossiping about his latest trip to the doctor with his friends Roz Hernandez and Darren Bluestone, the tenor of the conversation takes a turn when Bluestone shares that he’s back with his abusive ex-boyfriend.

“Is this real or a joke?” asks Henry, before he and Hernandez begin listing many of the problematic issues with the ex- including physical violence.

Darren pushes back trying to defend the boyfriend as “feisty”, “passionate,” “rowdy,” and the always popular “he’s changed.”

“You think I’m being abused? Give me a break,” says Darren defensively before adding, “I love him.”

Bluestone asks “what else is there?” to which Hernandez drops a truth bomb: “Respect.”

I love when Michael Henry takes his talents into these important corners of LGBTQ lives. Without getting heavy-handed, he addresses a real issue that’s often ignored.

Studies show that abuse in same-sex relationships is heightened because of the stress of money, unemployment, drug use, HIV status, and even internalized homophobia.

Many years ago, my first boyfriend was emotionally and verbally abusive to me. For nearly two years I allowed the toxic relationship to continue using many of the same defenses used by Bluestone here.

I didn’t and still don’t look back in anger, but I finally realized I had to power to leave.