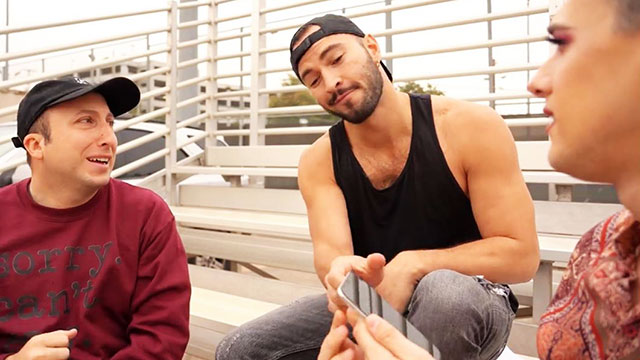 Hanging out with his friends on the bleachers – as gay men are inclined to do – Henry snatches Adrian Anchondo’s phone out of his hand when he hears the familiar sound of a Scruff alert.

Reading Anchondo’s profile he sees, “No Fems no flakes. If you don’t work out than we won’t work out.”

In unison, Henry and Mackston: “You?”

“I just like guys’ guys. You know, guys that work out and go to the gym like me,” says Anchondo. “It’s just a preference.”

As Anchondo laughs, Henry and Mackston launch into a dialogue about the kind of men THEY prefer.

“You don’t have to be sexually attracted to a fem guy, but to explicitly say ‘no fems’ and ‘masc4masc only’ in your profile is kind of a douche move,” says Mackston before adding, “I love a fem top.”

Henry chimes in, “I will only bottom for a bottom.”

After listing several “masc” tropes like guys who wear “basic black tank tops and ball caps,” or deepen their voices, Henry shares his preference for “fem” guys comes from feeling he can be his authentic self with them.

In true Michael Henry form, the short video not only exposes but explores yet another stigma the LGBTQ community inflicts upon itself.

Hit play below and then tells us your thoughts in the comment section.