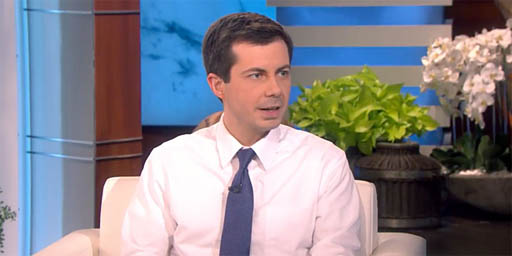 During his appearance on ELLEN Friday, South Bend Mayor Pete Buttigieg addressed an accusation by Vice President Mike Pence that he has been attacking Pence’s “Christian faith” as a means to further his presidential aspirations.

“I’m not critical of his faith,” the mayor told Ellen DeGeneres. “I’m critical of bad policies.”

Back to Pence, the 37-year-old White House hopeful told Ellen he isn’t “interested in feuding with the Vice President.”

“But, if he wanted to clear this up he could come out today and say he’s changed his mind,” said Buttigieg. “That it shouldn’t be legal to discriminate against anybody in this country for who they are.”

Buttigieg also spoke about the influence of religion on his life and how it guides him.

“When I’m in church, the scripture that I hear is about taking care about the least among us it’s about lifting up those who are most vulnerable,” he explained. “It’s a message that is fundamentally about love. Love and humility. Humbling yourself before God and putting other people before you.”

Noting that many people were disappointed a woman wasn’t elected president in 2016, Ellen asked the mayor why those people should vote for him in the 2020 election.

Underscoring the importance for administrations to have gender diversity and gender balance, Mayor Pete was quick to say he’d definitely be open to having a female running mate should he win the Democratic primary.

The pollster wrote in his report, “The emerging dark horse in this race may be Pete Buttigieg, who has gone from a virtual unknown to vault to 11% support, trailing only Biden and Sanders and ahead of Warren.”

The poll indicated Buttigieg has seen a 33-point increase in name recognition in recent weeks, almost all of it favorable.

And the latest poll out of Iowa from Monmouth University also shows Buttigieg in third place (9% support) behind Biden (27%) and Sanders (16%).