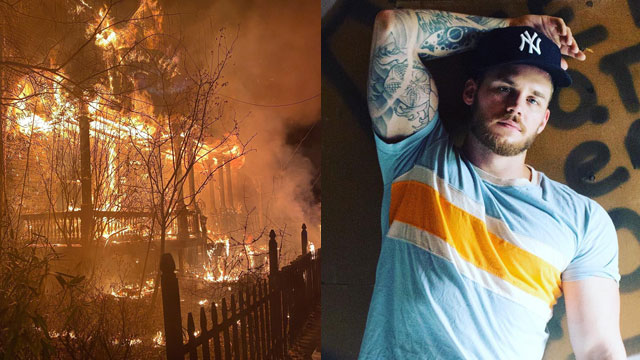 Adult performer Matthew Camp woke up in the early morning hours of January 14 to find his home in Poughkeepsie, New York had been set ablaze in an apparent hate crime.

“An arsonist poured gasoline on the front porch of my home and set it on fire in an apparent hate crime,” writes Camp in an Instagram post. “I was asleep inside. I am alive to face this person one day but everything I have ever owned is gone.”

“Share this story because queer people are still under attack all over the world,” added Camp. “Our voices will not be silenced.”

The former go-go boy turned sex-positive advocate and OnlyFans star went on to share that since the attack “I’m just living day to day trying to piece together what’s left.”

He closed his post thanking friends and fans for their support and “continued fight to keep our queer families safe.”

Despite the vast damage to the home, Camp and his friend Six Carter were able to escape the fire unharmed.

A GoFundMe campaign has been set up by friends to help rebuild his life and replace some of his belongings.

A home security camera captured the arsonist coming up the steps of Camp’s home just seconds before the blaze and splashing a liquid (presumably gasoline) all over the front porch. The time stamp on the video shows it was 5:09 am.

The city’s police and fire departments received 911 calls reporting the fire at 5:12 am.

The Poughkeepsie Journal reports that once the fire was out, “an investigation quickly determined that it was a case of arson.” The identity of the arsonist is still unknown but authorities are continuing to investigate.

The home was previously owned by a “Satanist,” Joe ‘Netherworld’ Mendillo who died in January of last year. Camp purchased the residence in October.

The home is apparently well-known in the area as the “Halloween House.” The nickname is apparently derived from decorations both outside and inside the residence and a hearse reportedly used to sit in the driveway.

I interviewed Camp a couple of years ago as he was launching a new video series project. I found him to be not only polite and well-spoken, but sharp as a tack regarding business and how he views life. You can listen to our chat below.