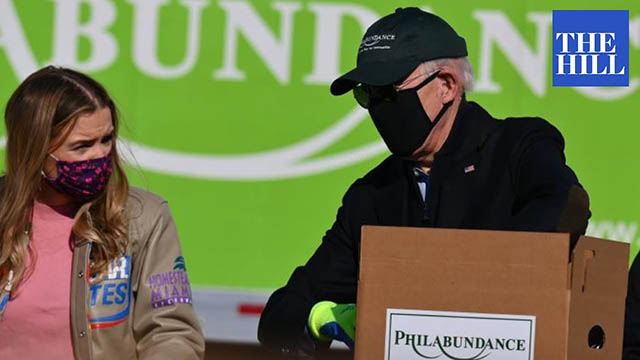 Biden was volunteering as part of MLK Day of Service at Philabundance, assembling boxes of food for those in need.

The President-Elect and Dr. Jill Biden were among the many volunteers at the South Philadelphia location, working together to fill boxes of food. Joining them were daughter Ashley, granddaughter Finnegan Biden and a boyfriend of another Biden granddaughter, Peter Neal.

Philabundance is a member of Feeding America, a network of food banks across the United States. For more information on Philabundance and what they do, click on their website, here.

Similarly, Vice President-elect Kamala Harris and soon-to-be Second Gentleman Doug Emhoff spent the holiday volunteering at Martha’s Table in Washington DC. The efforts are part of the Biden campaign’s national day of service ahead of the inauguration.

No word as to Donald Trump’s MLK activities today. The only known item on his schedule is his departure from the White House on Biden’s inauguration day.