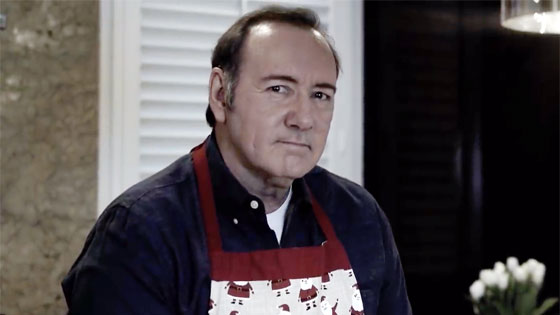 A massage therapist, who was permitted to anonymously file a lawsuit against Academy Award winner Kevin Spacey (above screen capture) for sexual assault, has apparently died.

According to The Hollywood Reporter, Spacey’s legal team filed a notice in court that the accuser’s attorneys had notified them on September 11 that their client had ‘recently passed.’

No details regarding the therapist’s death were disclosed.

The plaintiff, using the name ‘John Doe,’ filed suit in September 2018 alleging Spacey forced him to grope the actor’s genitals twice during a massage at Spacey’s private residence in October 2016.

In April, Spacey’s attorneys asked a federal judge to order the accuser to identify himself or dismiss the lawsuit.

But in May, U.S. District Court Judge Ronald Lew ruled the massage therapist’s lawsuit could continue anonymously due to his “vulnerability to humiliation, harassment, and threats” which was “exacerbated by the nature of Defendant’s status as a high-profile celebrity and the media attention that comes with it.”

In light of that ruling, the two legal teams had begun planning for what many expected to be a seven to eleven-day trial.

In August, there were reports that the therapist claimed to know of two other “masseur victims” of Spacey’s “sexual assaults who expressed concern for their safety and/or do not want their names revealed publicly in the media.”

The lawsuit could still continue, although according to The Hollywood Reporter the issue of anonymity could become complicated.

For the family of the accuser to show standing, they would probably have to identify the accuser. The judge may not be as inclined to protect the privacy of a deceased man since he would no longer be ‘vulnerable to humiliation.’

In July, prosecutors in Massachusetts dropped criminal charges against Spacey just days after his accuser invoked his Fifth Amendment rights while on the witness stand.

Spacey was facing charges of indecent assault and battery in connection to allegations of ‘groping’ an 18-year-old male at a Nantucket bar.

But the case fell apart when the teen’s cellphone went missing. Spacey’s lawyers alleged the teen and his mother had altered text messages before handing the phone over to the police.