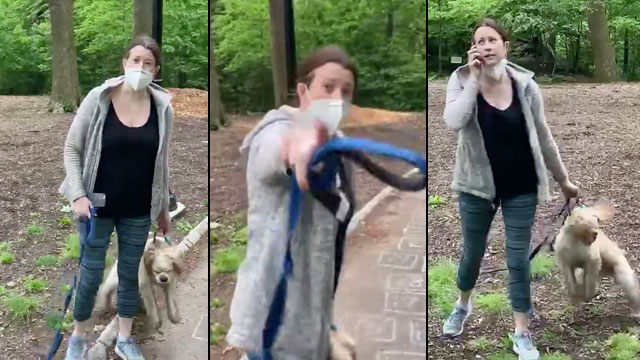 A white woman in New York City called the police and accused a black man of threatening her and her dog after he asked her to put the dog’s leash on while in Central Park.

Christian Cooper captured part of the exchange in a now-viral video that was posted to Twitter by his sister. The woman, later identified as Amy Cooper, is shown on video asking Cooper to stop recording her, or she was going to call the cops and tell them “there’s an African American man threatening my life.” She repeated the statement several times, each time sounding more distressed, while appearing to call 911 dispatch.

Meanwhile, Christian didn’t appear to move any closer to Amy. He tells NBC New York that he’s an avid bird watcher who was in The Ramble, a popular spot in the park for birders, around 8 a.m. Monday morning. He says he only asked Amy to put her dog on the leash in the area where it’s required to have your dog on a leash at all times.

“If the habitat is destroyed we won’t be able to go there to see the birds, to enjoy the plantings,” Christian explained on Monday night. When Amy refused, he says he offered her dog a treat and started recording the incident.

As the video begins, Amy Cooper is yanking her dog by the collar and demanding Christian Cooper to stop recording.

“Please don’t come close to me,” Christian Cooper says, as she approaches.

He asks her again not to come close. That’s when Amy Cooper says she’s going to call the police.

“I’m going to tell them there’s an African American man threatening my life,” she says.

“Please tell them whatever you like,” Christian Cooper says.

The video shows Amy Cooper on her phone.

“There’s a man, African American, he has a bicycle helmet,” she says. “He is recording me and threatening me and my dog.”

While she’s on the phone, her dog appears to be straining and trying to get free while she tries to restrain it.

“I’m being threatened by a man in the Ramble,” she continues even though it’s apparent the man isn’t threatening her. “Please send the cops immediately!”

At this writing the video has been viewed over 30 million times.

Oh, when Karens take a walk with their dogs off leash in the famous Bramble in NY’s Central Park, where it is clearly posted on signs that dogs MUST be leashed at all times, and someone like my brother (an avid birder) politely asks her to put her dog on the leash. pic.twitter.com/3YnzuATsDm

Amy Cooper spoke to CNN and says that since the video was posted, her “entire life is being destroyed right now.”

She told NBC New York on Monday that she admits she overreacted but she claimed that Christian was screaming, and that she felt threatened because she didn’t know what was in the dog treats.

“When I think about the police, I’m such a blessed person. I’ve come to realize especially today that I think of [the police] as a protection agency, and unfortunately, this has caused me to realize that there are so many people in this country that don’t have that luxury,” she continued.

Her employer, investment company Franklin Templeton, placed her on administrative leave Monday night and CNN reports she was fired as of Tuesday afternoon.

According to a Facebook post from Abandoned Angels Cocker Spaniel Rescue Inc., the dog in the video has been surrendered to the shelter. “The dog is now in our rescue’s care and he is safe and in good health,” the post said.

Mayor Bill de Blasio tweeted his disgust over the overt racism displayed in the video saying, “This kind of hatred has no place in our city.”

The video out of Central Park is racism, plain and simple.

She called the police BECAUSE he was a Black man. Even though she was the one breaking the rules. She decided he was the criminal and we know why.

This kind of hatred has no place in our city. https://t.co/6PP7jIwL1g