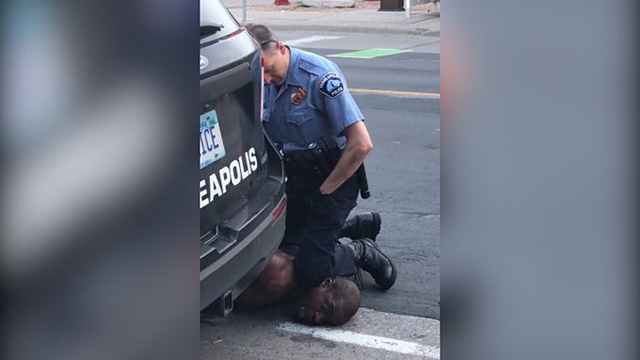 The Minneapolis Police Department has fired four officers involved in the death of George Floyd, a black man who died while being arrested on Monday. He was reportedly being detained as a possible suspect in a bad check-writing case.

The incident, showing one officer kneeling on the neck of handcuffed Gregory Floyd as he lay face down on the ground, was recorded and shared across social media on Monday night.

In the video, Floyd can be heard saying he could not breathe many times. As the video continues, he seems to lose consciousness.

You can see portions of the video footage below. Warning: extremely disturbing.

“I CAN’T BREATHE”: Video shows George Floyd, a black man that police say was a possible “forgery” suspect, pleading with Minneapolis cops for air as they press a knee into his neck. Floyd loses consciousness and later dies.

“The man looked already dead before the ambulance even got there. He was clearly trying to tell them he couldn’t breathe and they ignored him,” Darnella Frazier, one of the people who filmed the incident, told NBC News.

The police department has told reporters that the Minnesota Bureau of Criminal Apprehension has been contacted to independently investigate. Additionally, the department announced the FBI would also be investigating.

The names of the four officers have not been released by the Minneapolis Police Department.

The news of the firing of the officers was shared by Minneapolis Mayor Jacob Frey on Twitter where he called the decision “the right call.”

“Four responding MPD officers involved in the death of George Floyd have been terminated,” Frey wrote. “This is the right call.”

Four responding MPD officers involved in the death of George Floyd have been terminated.

This is the right call.

Now the work of systematically & methodically prosecuting them needs to happen. It needs to be done openly, in plane sight, just as Floyd was murdered, and it needs to be performed with the absolute utmost professionalism and reporting so that future murderers will be on notice. https://t.co/3qP5PFuToZ

You’re not truly pro-life if you’ve seen the video of Ahmaud Arbery and George Floyd being murdered and your first response is still:

“He was resisting arrest.”
“Wait for the entire story.”
“Does he have a criminal record?”
“What did he do to deserve that?”#GeorgeFloyd

#Murdered This man is a murderer. He needs to be arrested and charged. A uniform doesn’t give you the right to murder. I’m a police supporter but I don’t support murder. #icantbreathe #MinneapolisPolice pic.twitter.com/EYNsOJppXI