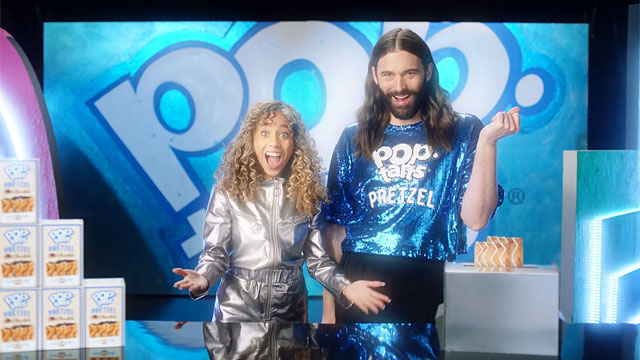 Queer Eye’s Jonathan Van Ness stars in a new spot for Pop-Tarts Pretzels set to air during the second quarter of the big game on February 2.

If you’re “struggs to snack,” Van Ness wants you to know Pop-Tarts ‘fixed that for you.’

“From ho-hum to so-yum, Pop-Tarts Pretzel is the perfect combo of sweet and salty,” extols the exuberant hairstylist.

The Street reports that immediately after the ad airs, Pop-Tarts plans a live giveaway for fans who follow @PopTartsUS to win gifts like the sparkly jersey Van Ness wears in the commercial and more.

Look for more LGBTQ representation during the Super Bowl.

• RuPaul’s Drag Race alums Miz Cracker and Kim Chi will star in a spot for Sabra hummus plus:

• Openly lesbian Katie Sowers, an Offensive Assistant Coach for the San Francisco 49ers, will be featured in a Microsoft ad

• And talk-show queen Ellen DeGeneres will star with wife Portia de Rossi in an advert for Amazon’s virtual assistant Alexa.