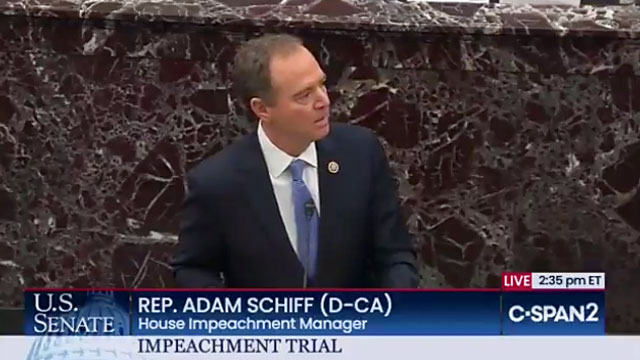 Throughout the impeachment trial, Donald Trump’s lawyers have said that the House impeachment investigation should have played out in court. They’ve repeatedly said that subpoenas for witnesses and documents must take place in the courtroom because the judicial branch is an essential check on the legislative branch.

But House Manager Adam Schiff incited laughter in the Senate when he announced that Trump’s Justice Department argued in court today that judges have no place to enforce subpoenas because of the impeachment power.

According to reports, when the judge asked DOJ lawyers “If Congress can’t enforce its subpoenas, what remedy is there?,” the attorneys said, “Impeachment.”

As Schiff said in front of cameras today, “you can’t make this up.”

SCHIFF: "While we've been debating whether POTUS can be impeached for bogus claims of privilege, the DOJ is resisting subpoenas in court today… the judge says 'if Congress can't enforce its subpoenas, what remedy is there,' & DOJ's response is impeachment! You can't make it up" pic.twitter.com/Tim1HHDgBO