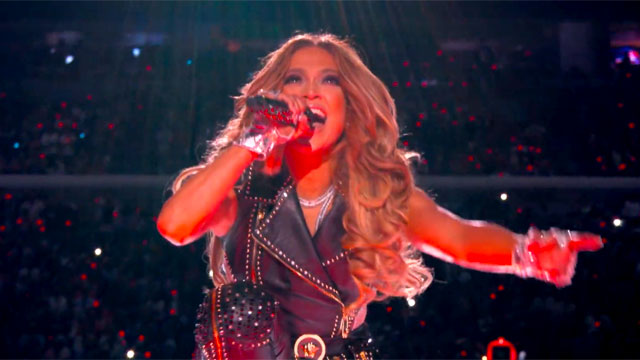 As my Instinct colleague Corey Andrew noted there seems to be some hypocrisy in how Janet Jackson’s Super Bowl performance was viewed differently compared to last night’s Latin spectacular. Click over to Corey’s post to get his full take.

There was also some disagreement on why it’s ok for a male rocker to parade around shirtless during his Super Bowl performance but 40+ Latina women being all sexy and empowered seemed to be “too much?” #morehypocrisy

“I don’t expect the world to act like the church, but our country has had a sense of moral decency on prime time television in order to protect children. We see that disappearing before our eyes. It was demonstrated tonight in the Pepsi Super Bowl Halftime Show—with millions of children watching. This exhibition was Pepsi showing young girls that sexual exploitation of women is okay. With the exploitation of women on the rise worldwide, instead of lowering the standard, we as a society should be raising it. I’m disappointed in Pepsi and the NFL.”

USA Today wondered, Was it empowering to watch two women of color over 40 performing in an often-provocative way? Or had we reverted back to a pre-#MeToo moment of objectifying women?”

Puh-leeze.  I think it was fabulous!

In any case, what matters is: gay Twitter was living for the sports ball extravaganza.

Take a look at some of the responses:

J.Lo bringing back the “Waiting For Tonight” lasers 20+ years later for the #PepsiHalftime show is gay rights. #HalftimeShow pic.twitter.com/nHIlt3uPd1

The fact that the entire gay population skips the Super Bowl and only tunes into the halftime show if it’s a female performer.. our minds… our power

just decided that I am no longer straight or gay, my sexuality is actually just Shakira playing the drums

All the gays after Shakira and Jennifer Lopez finished the halftime show pic.twitter.com/UuftAtypvQ

That was every gay fantasy I've ever had #HalftimeShow

Did y'all see the #HalftimeShow2020? I loved it. Two glorious women over 40 in their absolute prime, both sang their World Cup anthems, a celebration of (oft-forgotten) Puerto Rico, there were even kids in illuminated CAGES, for God's sake. They went there & I'm here for it.