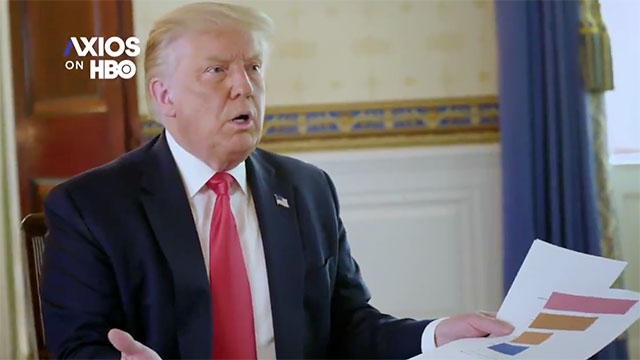 Other than Fox News’ Chris Wallace, I think this is the first extended example of a journalist going back and forth with Donald Trump on actual COVID-19 facts and data.

Axios’ Jonathan Swan got a 38 minute sit down with Trump. In this clip, Trump argues about his ‘great success’ in addressing the coronavirus pandemic.

Trump, it seems is comfortable with the ratio of death to diagnosed cases, while Swan is talking about the proportion of deaths to population in countries.

As Swan points out, for example, South Korea has a population of 51 million but has experienced only 300 deaths from COVID-19 which factors out to 0.0005 percentage of the population has died from the virus.

You’ll note in the clip, Trump hands Swan a graph with only four countries listed showing the U.S. being ‘the best.’ Talk about pick and choose.

In the second clip below, as Trump argues the virus is ‘under control,’ Swan points out 1,000 Americans are dying on average each day. “It is what it is,” says Trump.

In this extraordinary interview, @potus said deaths were down across Florida, Texas, and Arizona

So what’s the data?

We aren’t the best https://t.co/dH6vuYkJWa

Trump on AXIOS on HBO:

this man is repulsive. pic.twitter.com/YGNLydS3zT

Trump tells #AxiosOnHBO that he “can’t say one way or the other” whether John Lewis was impressive.

“He didn’t come to my inauguration.” pic.twitter.com/L0uevhjrG4