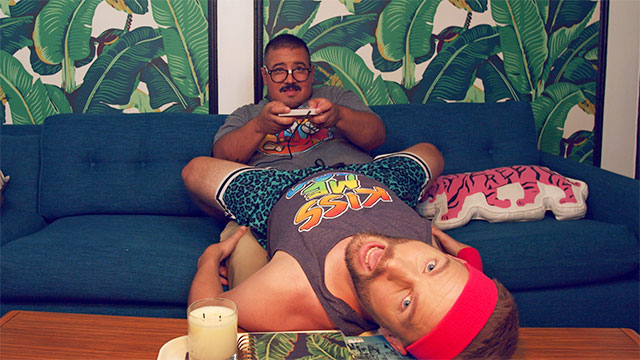 It’s always nice to start the day with a smile 🙂

So, I was happy to see an email this morning from award-winning, guitar-toting, singer/songwriter Tom Goss announcing, “Nerdy Bears are the cutest bears! Naturally, I wrote a song and made a video about it.”

While Tom has spent much of the past year promoting his latest album titled, Territories, a moody, richly-layered synth-pop collection exploring the complexities of love.

But now, he’s back in fun mode with this homage to those plus-size gamer guys.

“Given the hot mess that is 2020 I thought the world could use something light and full of fun, ” says Tom. “And what’s more fun than a ‘Nerdy Bear?'”

Nerdy bear, behind them glasses you’re a dirty bear.
So shake that a** in daddy underwear, and let me sneak into your secret lair.

You can find my previous coverage of terrific Tom on The Randy Report here.

Complete with lots of robust, hirsute men playing with Super Soakers, careening down a slip and slide, and dancing in a club (usually in slow motion), the video celebrates all the furry goodness.