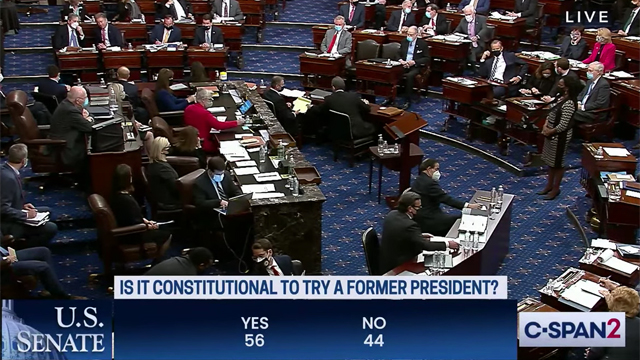 As the first day of Donald Trump’s second impeachment trial got underway, House Managers leading the prosecution against Trump began with a powerful video presentation compiled from actual footage from the January 6 invasion of the U.S. Capitol building.

Following the video, Trump’s own lawyers, during a meandering speech, acknowledged the video was a very compelling argument.

It’s worth noting that, in a written response a day ago, Trump’s lawyers described the mob who attacked the U.S. Capitol building “a small group of criminals.”

Does this look like a “small group of criminals?”

Weeks ago, five Republicans voted with Senate Democrats that the impeachment proceeding was constitutional.

After today’s presentations, Sen. Cassidy (R-LA) changed his mind and made it six Republicans who believe the impeachment is constitutional as the final vote was 56-44.

Many sources are reporting that Trump was irate to the point of screaming at the TV as his lawyer failed to make a full-throated defense.

Multiple people tell me Trump was basically screaming as Castor made a meandering opening argument that struggled to get at the heart of the defense team’s argument.

Asked why he thought Trump’s defense team did a terrible job, GOP Sen. Bill Cassidy responds, “Did you listen to it? OK then. It speaks for itself.” https://t.co/iqCQD4SlGQ