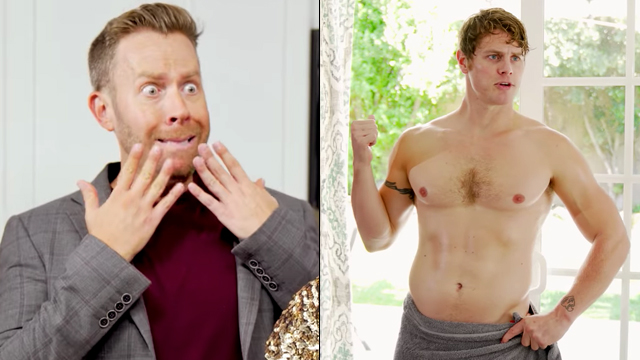 In the latest episode of Artie O’Daly’s Bad Boy web series, the wild and wacky cast of characters continue to spin out while O’Daly’s “Scott” tries to keep his footing in the middle of the insanity.

Whitney (Theresa Ryan) is hosting a house warming party in her ‘new home’ (really Scott’s house, but she keeps ignoring that fact) and everyone is waiting for ‘Bad Boy’ Jim (Drew Canan)  to arrive.

He’s apparently been waylaid by a longer than usual shower in the guest house with a buddy. You know how these things go…

Suddenly, FBI agent Calista (Alina Bock) shows up disguised as Whitney’s sister/Jim’s mom but no one seems to see through the disguise except for Scott.

Whitney: “I see your teeth grew back.”
Calista: “Let’s not talk about the past. Let’s focus on the present.”
Whitney: “How dare you tell me to focus when you know I suffer from rolling blackouts!” (as she takes a big swig from a bottle of wine)

Meanwhile, ‘Bad Boy’ BJ (Braden Davis) has decided to get decked out in a leather harness and snap some selfies: “I’m gonna go take thirst traps on the couch…”

Finally, hottie Jim shows up (in a towel thank god) and Calista’s charade looks like it might come crashing down.

But what we really want to know is: Does Daddy Scott finally hook up with Jim?

Kudos to O’Daly & company for keeping the off-kilter banter continually bouncing from character to character in fast-paced farcical fashion.

With this 15th installment, the Bad Boy series is clearly developing a loyal fanbase on YouTube. Check out my previous coverage of the web series here.