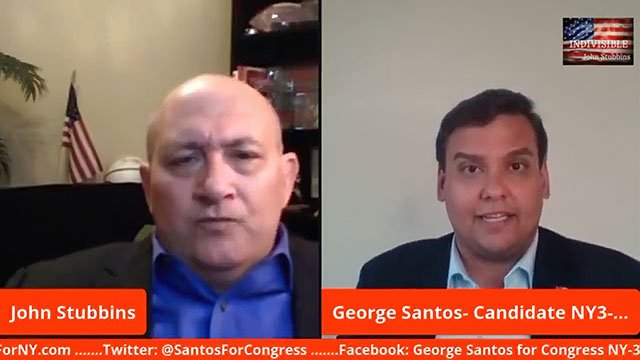 During a 2020 appearance on the conservative YouTube show “Indivisible with John Stubbins,” out gay Rep. George Santos declared that same-sex parents are “an attack on the family unit” which results in children becoming “troubled individuals.”

Transcript from the video clip:

“The family unit has been under attack for decades in different ways. The flavor of the decade is same-sex couples. To each their own, I don’t have anything against that, but they’re teaching in school that kids – that you don’t need a mommy and a daddy, you can can have two mommies and two daddies. I think that’s a little much for kids. That’s an attack on the family unit.

“The scales are tipped and there’s nobody left there and you have just one side, you start seeing troubled individuals. Troubled individuals are easier to manipulate and indoctrinate. And they buy pretty much anything and drink any Kool Aid you give them.”

Remember – Santos is the guy who was living with a boyfriend in 2014 while he was legally married to a woman.

Plus, his supposed husband, Matheus Gerard, reportedly joined a Facebook adoption group last summer. So, I’m guessing he changes his mind just like he changes his name.

In 2020, George Santos called "same-sex couples" an "attack" on "the family," and said schools “make excuses” by teaching kids "it's ok” to have single or gay parents.

Santos: "They're teaching …you can have 2 mommies have 2 daddies. I think that's a little much for kids.” pic.twitter.com/CSsjlw3lOT

In other George Santos news, Reuters reporter Steven Grattan tweeted a video sent to him that seems to show Santos in drag in Brazil.

As Grattan notes, the person in the video (:30 mark) appears to be wearing the same dress, necklace and earrings as “Kitara Ravache” (Santos’ alleged drag alias) in photos shared by Brazilian drag queen Eula Rochard.

Santos has denied ever being a drag queen.

The drag queen in this video sent to me by an anonymous source appears to be wearing the exact same dress, necklace, and earrings as Kitara Ravache in Brazilian drag queen Eula Rochard's photos that’s been circulating online, alleging it is U.S Rep. George Santos Santos4Congress pic.twitter.com/0Vr60lRVLf

And a new wrinkle has emerged about Santos’ claim that his mother died as a result of the terror attacks on 9/11.

The fabulist has claimed his mother was “at her desk” on 9/11 in the World Trade Center, and she later died of cancer from exposure to toxins at ground zero.

But NBC News reports that, according to records reviewed by the network, Santos’s mother left the U.S. in 1999 for Brazil and did not return until 2003, two years after the attack.

Rep. George Santos has claimed that his mother was at her office inside the World Trade Center during the 9/11 terrorist attacks, but records obtained by NBC News show she was living in Brazil at the time. https://t.co/UuwCeRTL5Q