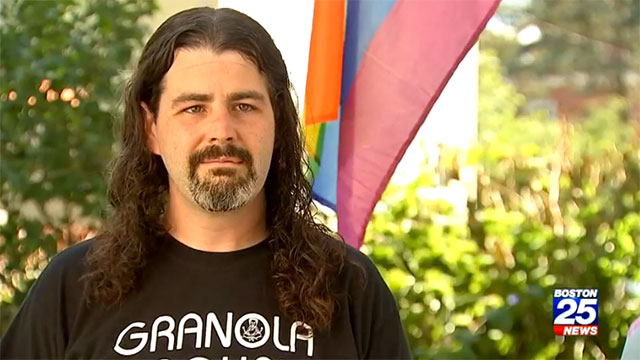 A gay man in the southeastern Massachusetts town of Taunton was attacked in his own front yard in late June for hanging a rainbow Pride flag.

Tom Anderson told local news affiliate Boston 25 News he and his husband Jacob had the flag up for only an hour when a random driver by stopped his car, got out and attacked him.

As the man approached, Anderson says he cursed at him, using homophobic slurs and punched him in the face.

“I was kind of in a state of disbelief like ‘Really? I’m in my own yard,’” Anderson told the news outlet.

“I saw the guy just come up and yell those nasty words at my husband and then hit him two or three times and then took off back into his car and screeched away,” said Jacob Anderson, Tom’s husband.

As a result of the attack, Tom lost his two front teeth and required several stitches to close his wounds.

“It’s definitely a hate crime just based on the words he used,” Jacob added.

The couple says another person passing by witnessed the attack and stopped to help them.

The local police were called and given a description of the man and his car but no word yet on if the attacker has been found. Taunton Police say the investigation is ongoing.

Tom says his concern is that people may think “this is okay to do.”

Still, the Andersons share their community has been “amazing.” Since the incident, they’ve seen an outpouring of support from friends, neighbors, co-workers, and even strangers. The couple, who have been married nine years, say they’ve even received a home security system as a gift.

And instead of becoming fearful in the aftermath of the attack, Tom says he has no plans to stop flying his Pride flag.

In fact, he says, “I want to just keep it up all year long now.”