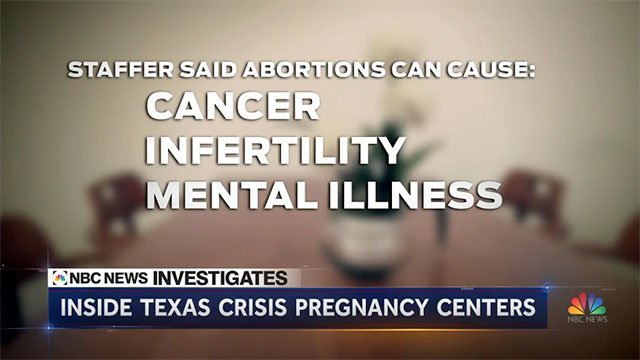 With abortion rights rapidly vanishing in many states, NBC News took a look at crisis pregnancy centers (CPCs) which provide free services and counseling for women struggling with unplanned pregnancies.

CPCs outnumber abortion clinics 3 to 1 nationwide, although NBC News found some wild misinformation being slung around.

Is it dangerous to be a women in Texas ?The state has one of the world’s worst maternal mortality rates +highest state rate of repeat teen pregnancies + when two of our producers visited state-funded crisis pregnancy centers info they were given was untrue https://t.co/Wl0BkTS7Co

When two NBC News producers visited state-funded CPCs in Texas to ask for counseling, counselors told them that abortions caused mental illness and implied abortions could also cause cancer and infertility.

The centers, which are often faith-based, frequently get funding from religious groups and individual donors, but many also depend partly on taxpayer dollars.

Texas initially spent $5 million every two years on the program, but that figure has ballooned to a record $100 million for 2022 and 2023,

Watch the report below.