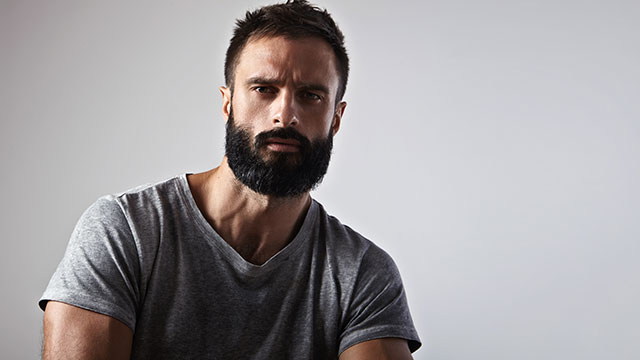 Hanging with friends Clint Keller and Ty Chen in the park, Henry queries the guys on the lack of smiles on social media.

Keller and Chen don’t hesitate answering with a list of reasons why not to smile:

“Well, gay men want to look f*ckable at all times.”
“And mysterious.”
“And tough.”
“And more masculine than they really are.”

Henry comes back with the obvious: “So, smiling makes you look fem?”

“Well, it makes you look happy,” replies Keller before Chen adds, “And that’s not tough.”

“All I’m saying is: obvious signs of happiness are a turn-off,” says Keller. “I don’t want to f*ck a happy person.”

Chen shares his penchant for guys who look like they’re “about to fight someone.”

Cue to long admiring “oooooooooooohs” from the group.

In fact, the guys promise Henry that he’ll “double the amount of d*ck” he gets if he stops smiling in online photos. So, Henry gives it a try, doing a reset shake-off before settling into a rather stoic expression.

And just like that…along comes BJ (BJ Bingham) who spotted our hero’s dispassionate demeanor from across the park and felt drawn to Henry’s “tough” look. #Success

Some folks in the comment section of the YouTube page noted that lots of guys on dating apps don’t smile, and that might be an attempt to appear more masculine.

One person boiled it down to tops wanting their bottoms to look “fun and happy,” while bottoms want their tops to look “gruff and moody.”

Funniest response: “My face has so much botox I haven’t smiled since I was 26.”

What do you think, readers? Do you avoid smiling in pics? If so, is it for a particular reason?

Or are you good with a smile? Let me know in the comments section.