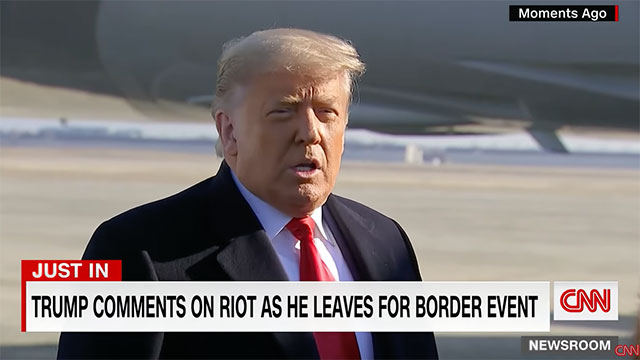 In his first remarks to the press since the invasion of the U.S. Capitol building last week, Donald Trump took no responsibility for the violence and chaos that took place after he encouraged his followers to “march up to the Capitol” and “fight like hell.”

A defiant President Donald Trump insisted Tuesday his speech inciting the riot at the US Capitol was “totally appropriate” while at the same time calling for “no violence” in his first public remarks to reporters after the insurrection last week.

Trump assumed no responsibility for what happened last Wednesday, despite telling his supporters in the hour beforehand to “fight like hell.” And he did not specifically decry attempts to find and kill political leaders, including his own vice president.

Before leaving the White House earlier in the day, the Donald also denounced the current impeachment proceedings developing in Congress calling it a “continuation of the greatest witch hunt in the history of politics.” He also insinuated that those actions could lead to more violence.

“This impeachment is causing tremendous anger, and you’re doing it and it’s really a terrible thing that they’re doing,” he told reporters.

“What Trump did today, blaming others for what he caused, is a pathological technique used by dictators,” he says, adding that Trump should resign or be impeached.

Five people died, things got smashed up, shit was smeared everywhere and we infected some Democrats with Covid, so yes, IT WAS A PERFECT SPEECH! https://t.co/LJlRUJVr2P