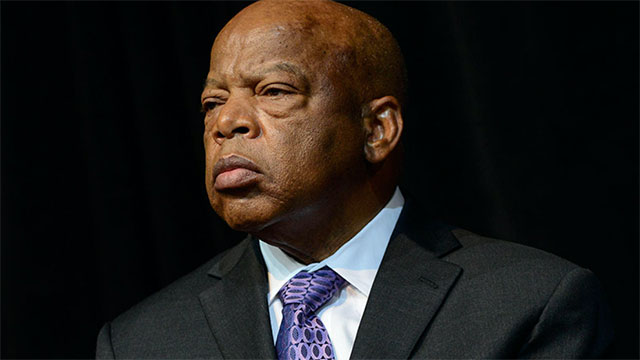 Congressman John Lewis (D-GA), an icon in the fight for civil rights for decades, has died at the age of 80 after his battle with pancreatic cancer.

I’m careful not to write “passed away,” because Lewis never merely “passed” anything in his storied life.

The youngest of the Big Six civil rights activists, Lewis garnered national headlines after leading hundreds of protesters in the Bloody Sunday march across the Edmund Pettus Bridge in Selma, Alabama, on March 7, 1965.

Knocked to the ground and beaten by Alabama state troopers, Lewis’s skull was fractured and images of the infamous moment were spread across the country, crystallizing the civil rights movement to such a degree the Voting Rights Act of 1965 was passed shortly thereafter.

The civil rights lion was elected to Congress over 20 years later representing his district in Atlanta, Georgia.

And from the New York Times:

Mr. Lewis led demonstrations against racially segregated restrooms, hotels, restaurants, public parks and swimming pools, and he rose up against other indignities of second-class citizenship. At nearly every turn he was beaten, spat upon or burned with cigarettes. He was tormented by white mobs and absorbed body blows from law enforcement.

Mr. Lewis was arrested 40 times from 1960 to 1966. He was repeatedly beaten senseless by Southern policemen and freelance hoodlums. During the Freedom Rides in 1961, he was left unconscious in a pool of his own blood outside the Greyhound Bus Terminal in Montgomery, Ala., after he and others were attacked by hundreds of white people. He spent countless days and nights in county jails and 31 days in Mississippi’s notoriously brutal Parchman Penitentiary.

Lewis didn’t restrict his battles to civil rights for Black Americans. He was also an early ally of the LGBTQ movement.

In 2003, he penned an op-ed for the Boston Globe arguing in favor of same-sex marriage long before others would come to embrace that call.

We are now at such a crossroads over same-sex couples’ freedom to marry. It is time to say forthrightly that the government’s exclusion of our gay and lesbian brothers and sisters from civil marriage officially degrades them and their families. It denies them the basic human right to marry the person they love. It denies them numerous legal protections for their families.

In the 1990s, he voted against the heinous ‘Defense of Marriage Act’ which defined marriage as only between a man and a woman, and he stood with the pro-LGBTQ advocacy group the Human Rights Campaign. He also voiced his opposition to Georgia’s prohibition on adoption by LGBTQ people.

One of my favorite tributes was from Lewis’s friend and former UN ambassador, Andrew Young: “He didn’t convince you by his arguments. He convinced you by his life.”

People much more eloquent than I offered their tributes to Lewis.

59 years ago today I was released from Parchman Farm Penitentiary after being arrested in Jackson, MS for using a so-called “white” restroom during the Freedom Rides of 1961. pic.twitter.com/OUfgeaNDOm

Not many of us get to live to see our own legacy play out in such a meaningful, remarkable way. John Lewis did:https://t.co/KbVfYt5CeQ

I know of no man with more courage than John Lewis. He was a giant walking among us. When I saw him, I couldn’t help but think one thing: “I haven’t done enough.” May his life and legacy inspire every one of us to strive for justice, equality and what is right. pic.twitter.com/jtoCnmjexz

You did, indeed, fight the good fight and get into a lot of good trouble.

You served God and humanity well.
Thank you.
Take your rest. #JohnLewis pic.twitter.com/U1cPEwfCGO

John Lewis was an American treasure.

He gave a voice to the voiceless, and he reminded each of us that the most powerful nonviolent tool is the vote.

Our hearts feel empty without our friend, but we find comfort knowing that he is free at last.

Statement from Jimmy Carter on the passing of John Lewis pic.twitter.com/neoHpc0jBt

.@RepJohnLewis was a titan of the civil rights movement whose goodness, faith and bravery transformed our nation. Every day of his life was dedicated to bringing freedom and justice to all. pic.twitter.com/xMbfAUhLUv

John Lewis was an icon who fought with every ounce of his being to advance the cause of civil rights for all Americans. I’m devastated for his family, friends, staff—and all those whose lives he touched.

My friend, thank you for showing the world what #GoodTrouble looks like. pic.twitter.com/cvG8nSJCW5

John Lewis was a true American hero and the moral compass of our nation. May his courage and conviction live on in all of us as we continue to make good trouble for justice and opportunity.

John Lewis was a giant among men. A Civil Rights Icon, an indefatigable champion for justice, and a hell raiser known for making ‘good trouble.’

In mourning his passing, let us aspire to build the nation that Congressman Lewis believed it could be.

May he Rest In Peace. pic.twitter.com/sDJ169T9bE

We have lost a legendary leader, civil rights icon and change agent extraordinaire.

John Lewis altered the course of history and left America a much better place.

John Lewis gave all he had to redeem America’s unmet promise of equality and justice for all, and to create a place for us to build a more perfect union together. In so doing he became the conscience of the nation.

John Lewis was the truest kind of patriot. He believed America could be better, even live up to its highest founding ideals of equality & liberty for all. He made good trouble to help us get there. Now it’s up to the rest of us to carry on his work. Rest in power, my friend. pic.twitter.com/a3gEAiMzp3

John Lewis’s words to FBI employees in 2017 resonate—especially in 2020: “Voting is the most powerful nonviolent tool that we have, and everybody must use it to make the world a better place.”