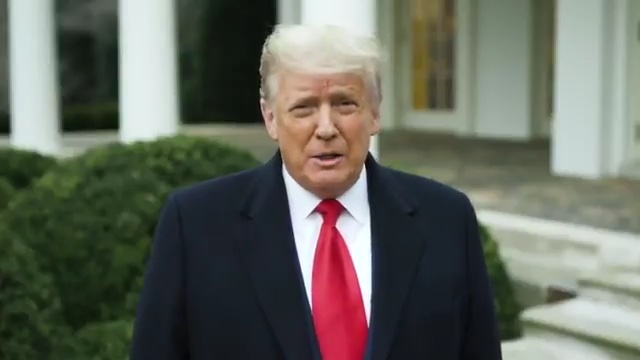 After hours of violent insurrection by mobs of MAGA cultists, Donald Trump asked his cultists who violently breached the U.S. Capitol to go home while still pushing his baseless claims of election fraud.

I know your pain. I know you’re hurt. We had an election that was stolen from us. It was a landslide election. And everyone knows it. Especially the other side.

It’s a very tough period of time. There’s never been a time like this, where such a thing happened, where they could take it away from all of us. From me, from you, from our country. This was a fraudulent election. But we can’t play into the hands of these people. We have to have peace.

So go home. We love you. You’re very special. You’ve seen what happens. You see the way others are treated that are so bad and so evil. I know how you feel. But go home and go home in peace.

As you can see, Twitter tagged the video for its “disputed claim of voter fraud.”

Prior to Trump’s video, President-elect Joe Biden issued his own message calling on Trump to call off the domestic terrorists.

“I call on President Trump to go on national television now to fulfill his oath and defend the Constitution and demand an end to this siege,” Mr. Biden said from Wilmington, Delaware.

Biden urged the insurrectionists to end what was effectively an armed occupation of the Capitol. Biden also called out Trump for not speaking out against the violence.

“At their best, the words of a president can inspire. At their worst, they can incite,” said Biden.

“This is not dissent. It’s disorder. It’s chaos. It borders on sedition, and it must end now. I call on this mob to pull back and allow the work of democracy to go forward.”

BREAKING: President-elect Joe Biden: “At this hour, our democracy is under unprecedented assault.”

“I call on this mob to pull back and allow the work of democracy to go forward.” https://t.co/EzJJ0Rqggf pic.twitter.com/JvOTEiRWmw