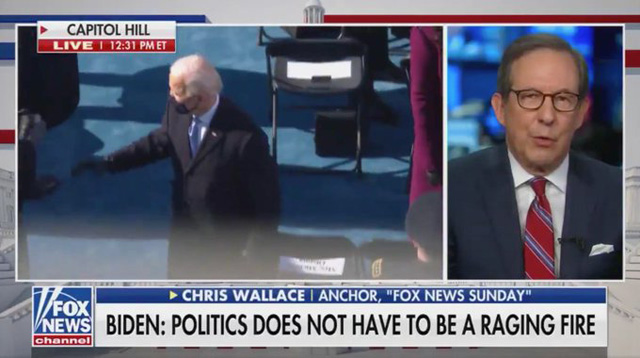 Following President Biden’s inaugural speech, I’m sure it shook the Fox News audience to hear anchor Chris Wallace declare, “I thought it was a great speech. I have been listening to these inaugural addresses since 1961. John F. Kennedy’s ‘ask not’. I thought this was the best inaugural address I ever heard.”

I don’t know about “the best,” as Ronald Reagan, Bill Clinton and Barack Obama are all excellent orators. But I thought Biden’s speech was perfect in tone and balance.

Many on Twitter think his comments today could foreshadow Wallace’s departure from Fox News.

Wallace also noted a passage in Biden’s speech that seemed to address the power of truth and lies in the media.

Fox News’ Sandra Smith wonders if Biden signing executive orders on his first day will show he’s not for unity, asking “what message does this send.”

Chris Wallace: “It says that he won. It’s as simple as that.” pic.twitter.com/y1zGSBubtV

Chris Wallace will probably have a pink slip in his next paycheck, but Damn, I respect him #SpeakingTruthToPower https://t.co/AEmqhcPhpQ

Chris Wallace on Fox News just now said he’s been listening to Inaugural speeches since Kennedy’s in 1961 & that Biden’s was the best he’s ever heard. This being said on Fox is not a small deal. 👏🏼