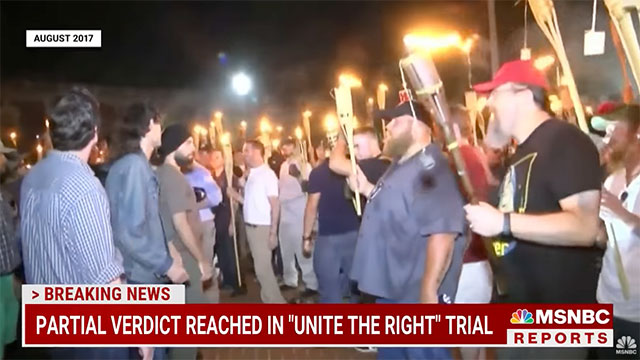 A Virginia jury today found the primary organizers of the deadly 2017 rally in Charlottesville liable under state law for injuries to counter-protesters, awarding more than $25 million in damages.

The verdicts were split, however, as the jury was deadlocked on two federal conspiracy charges. The plaintiffs say they will seek a retrial on those charges.

Jurors found the main organizers of the deadly right-wing rally in Charlottesville in 2017 liable under state law, awarding more than $25 million in damages – but were deadlocked on federal conspiracy charges. https://t.co/AwmRHbBCVn

The verdict in the civil trial, though mixed, was a rebuke for the defendants — a mix of white nationalists, neo-Nazis and white supremacists.

They were found under Virginia law to have engaged in a conspiracy in the lead-up to the rally, which began as protest over the removal of a Confederate statue and resulted in a car attack that killed one counterprotester, 32-year-old Heather Heyer.

The case in U.S. District Court in Charlottesville was brought by nine plaintiffs, four men and five women, including four people injured in the car attack.

In addition to their physical injuries from the crash, including three concussions and a skull fracture, the plaintiffs testified that they suffered from post-traumatic stress disorder, including insomnia, the inability to concentrate, flashbacks and panic attacks.

I should mention Richard Spencer, the most high-profile defendant in the case, represented himself in the case.

The defendants claimed they didn’t intend on violence to happen at the rally. But numerous communications presented during the court case between the organizers – from before and after the rally – mentioned the use of violent force including using cars to hit counter-protesters.

BREAKING: A jury has found white nationalist leaders liable for $25 million in damages for the violent 2017 Unite the Right rally in Charlottesville. The jury awarded the money to nine people who suffered physical or emotional injuries. https://t.co/Fo92EX6oK3