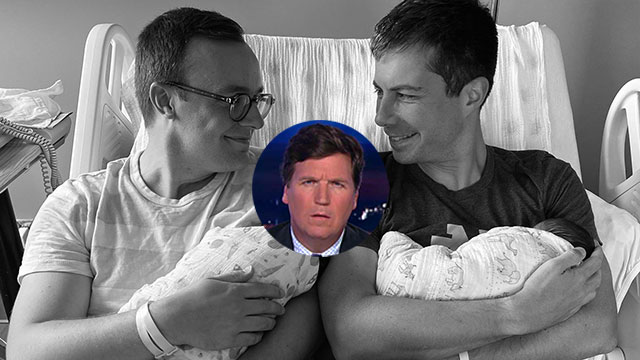 Just when you think Tucker Carlson couldn’t be a bigger asshole, last night Carlson thought it would be funny to mock Transportation Secretary Pete Buttigieg for taking a couple of weeks of paternity leave so he could care for and get to know his new babies.

Tucker Carlson mocks Pete Buttigieg for taking paternity leave: "Paternity leave, they call it, trying to figure out how to breastfeed, no word on how that went." pic.twitter.com/zFnp6uSser

“Pete Buttigieg has been on leave from his job since August after adopting a child – paternity leave, they call it – trying to figure out how to breastfeed,” said Carlson. “No word on how that went.”

“But now he’s back in office as the Transportation Secretary and he’s deeply amused, he says, to see that dozens of container ships can’t get into this country,” added the snarky talking head.

Some thoughts from HuffPost:

Fox News also offers paternity leave to its employees. “Fox & Friends First” co-host Todd Piro announced earlier this year that he would take a six-week paternity leave to spend time with his daughter. In April, Fox News host Jesse Watters took a brief leave after the birth of his third child.

Carlson has been accused of homophobia many times in the past. Earlier this year, an entry from his college yearbook went viral. In it, he wrote that he was part of the “Dan White Society.” Many interpreted that as a reference to the man who in 1978 murdered San Francisco Mayor George Moscone and city supervisor Harvey Milk.

While Pete was taking some time for his newborn twins, Penelope Rose and Joseph August, I’m pretty certain he was working from home completely aware of the supply chain issues happening in the country.

While not surprised, folks were not enthused with Tucker’s homophobic assholery.

In case anyone thought @TuckerCarlson‘s homophobia could not be more grotesque, take a listen to this.

Carlson is really a vile man. Too bad he insists on proving it over and over again.

I am just struck by the incredible cruelty of that comment. Seriously, this couple has adopted twins, and they’re being attacked for that?

This is @TuckerCarlson‘s way of calling @SecretaryPete
a “fag” without using the word.

.@TuckerCarlson I took two weeks paternity leave after the birth of each of my kids. Not all of us were raised among the uber-wealthy who ship their kids off to boarding school. Some of us take time off to care for our kids.

Paternity leave is for fathers to bond with and take care of their children.

Clearly Tucker’s father didn’t do that with him.

Pete Buttigieg is an American Hero.

Joy Behar: “Regarding the mocking of the manliness of Pete Buttigieg, I’d like to just say that Pete Buttigieg served six years in the Navy Reserve and was deployed in Afghanistan. Tucker Carlson was booted off ‘Dancing With the Stars’ after he couldn’t even do the Cha Cha.” pic.twitter.com/6pyY1zh6Rl