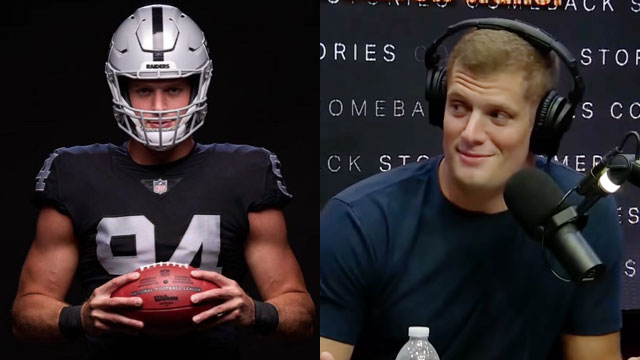 Carl Nassib, the Las Vegas Raiders defensive end who came out as gay this summer, sat down for his first real interview this week since the big announcement.

During an appearance on the “Comeback Stories” podcast hosted by his Raiders teammate Darren Waller, Nassib shares insight into his life and his perspective on the coming out experience.

One thing he makes very clear from the beginning: he tends to view life through a positive lens, so he doesn’t see past experiences as how they were “bad” or “not what I wanted.”

Nassib is also transparent about why and when he chose to come out saying, “I didn’t really do it to break barriers.”

“I did it because I felt an obligation to the LGBTQ community to bring representation – to bring visibility – to a very, very popular industry that doesn’t have a lot of representation.”

“It wasn’t easy. Personally, for my life, I didn’t want to do it. But I felt a huge obligation to my community – to all the young kids out there who are struggling with their sexuality. If I could help just a few out then I really could sleep better at night.”

He also adds, “I will say, being the only out gay guy in the NFL is a little stressful.”

When asked about what life was like before coming out, Nassib underscored that life had been pretty great. In fact, he admits, “I didn’t know I was f*cking gay until about four years ago.”

But over time, he did realize the one thing missing from his life was “to be someone’s number one priority.”

Podcast co-host Donny Starkins inquired as to how he “got that,” to which Nassib replied, “Oh, I met an awesome guy. He’s the best.”

Internet detectives believe they’ve figured out that that “awesome guy” might be Erik Gudzinas whose Instagram page has several photos of the two hanging out, hiking, and more.

Nassib replied to one post with a heart emoji to which Gudzinas responded with the same.

One observation I’d like to make: for years, the concerns in NFL front offices about having an openly gay player was the “distraction” it would create for a team.

It’s worth noting that the Las Vegas Raiders are 3-0 this season. So, no distraction…

Hit the play button below to listen to Nassib’s take on his journey to today. I’ve cued up the chat to the section where Nassib begins chatting on the coming out process.