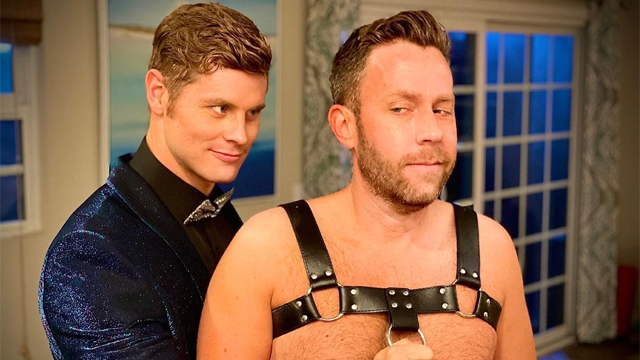 In this latest installment of Artie O’Daly’s wacky Bad Boys web series, Scott (played by O’Daly) considers alternate realities after his evening is ruined by some bad choices.

It seems Scott’s hottie maybe-boyfriend Brian (Doug Rogers) broke things off some time ago worried that some hanky-panky might be in the making with ‘Bad Boys’ Jim (Drew Canan) and James (Alex Dyon).

Ok, there was a shower three-way with the Bad Boys, but Scott kept his underwear on, so it doesn’t really count, right?

The wet and wild three-way was one of those ‘bad choices’ Scott is now reconsidering.

Scott texts Brian to try and patch things up but Jim criticizes the overly long Harry Potter length of his ‘heart-felt’ message. There’s also spilled wine, an off-her-rocker FBI agent (Alina Bock), and the possibility of a four-way dashed.

But Jim insists Scott’s life would be smoother if he took Jim’s advice more often.

In that re-imagined universe, Jim is a dapper relationship expert who’s to-the-point text message to Brian inspires him to break the international speed record for a booty call showing up in a dazzling disco-tastic gold sequined shirt.

That crazed FBI agent might (or might not) be foiled again, some tasty buns are served, and a leather harness makes an appearance.

Will things work out for Daddy Scott and Brian? We don’t want to spoil the ending but we definitely want to see more of the Bri-man. #woof

If that all sounds wild, that’s because it is. The absurdist comedy never stops as O’Daly’s dialogue practically bounces off the walls making for a perfect mid-day brain break.

Make sure you stick around for the uber-clever end credit graphics by Charlie Branigan.

Hit the play button below, and you can check out more of my coverage of the Bad Boys web series here.