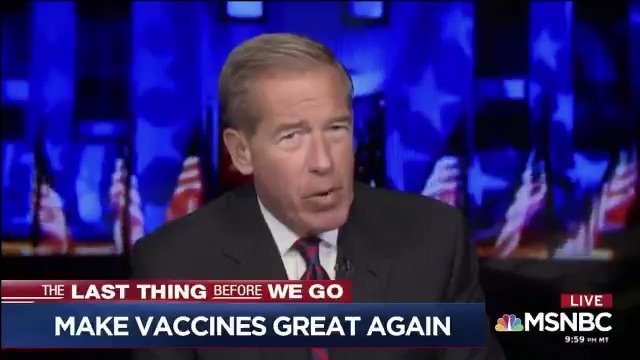 MSNBC’s Brian Williams threw down some masterful deadpan shade last night at the end of his 11th Hour program after former newsman Geraldo Rivera suggested on Fox News that the upcoming coronavirus vaccines should be named after Donald Trump.

Giving props to Trump as the ‘prime architect of Operation WarpSpeed,’ Rivera seems to think Trump the humanitarian scientist created the vaccine all by his little self.

“You know, for my money, Geraldo raises a good point there,” begins Williams. “You know it’s possible we just don’t give the president enough credit for his FDR-like devotion to tackling this virus. His laser-like focus, his daily devotion, the sympathy he’s forever expressing to the families of the quarter-million dead.”

Williams says all of this and more during a montage of Trump out on a golf course.

Brian Williams throws deadpan shade: “What Trump Steaks did for the hungry, what Trump Water did for the thirsty in our nation, what Trump University did to lift up the uneducated in our country. Along comes Trump Vaccine. The possibilities are endless.” pic.twitter.com/nWkuAMjLUJ