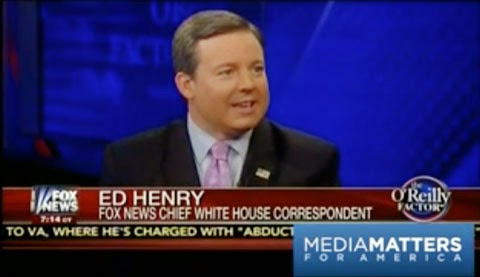 You can imagine the heads snapping up to the monitors over at Fox News when Chief White House Correspondent, Ed Henry, chose to point out that EVERYTHING isn’t President Obama’s fault.

In this case, Henry was reporting on the current ISIS violence.

Bill O’Reilly wasn’t having it. Finally after a minute or two back and forth, O’Reilly gives in begrudgingly to say “not the whole thing” is the President’s fault.

Henry: We can add Putin to the list. I don’t think Putin fears us right now either. Where I would say you’re not giving the President credit though, is that there’s been about 200 air strikes in Iraq. Prevented a genocide in Northern Iraq, right? There were 10s of 1000s of…

O’Reilly: But he had to do that.

Henry: Okay, well he did it. Whether he had to do it or not, you just acknowledge he acted.

O’Reilly: Let me decimate your argument there.

O’Reilly: If he had listened to me six months ago, ISIS never would have expanded into Iraq. We were calling for him to knock ISIS out six months ago when they weren’t nearly as strong. So you can say that the mountain and the humanitarian disaster is partly Mr. Obama’s fault because he didn’t listen to the CIA and he didn’t listen to guys like Panetta, who are now killing him. You know Panetta’s now killing him, right?

Henry: Sure and he said we should have left some troops behind in Iraq.

O’Reilly: Well, you can say well yeah, he prevented it, but it’s his fault he was even there to begin with. You can make that argument.

Henry: I’m not sure you can pin the whole thing on him.

O’Reilly: Not the whole thing.

What happens at the Fox News HQ when this happens? Are there lashings scheduled? Does Ed Henry see his bathroom privileges revoked?